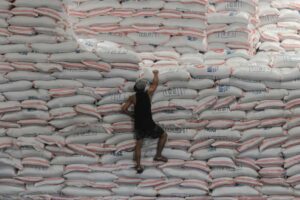 Workers arrange sacks of rice at a warehouse in Taguig City on Tuesday. The Department of Agriculture announced that the Philippines is now one of the top rice producers in the world. However, the El Niño’s effects might affect rice production targets this year. (MNS photo)

MANILA (Mabuhay) – The government has no choice but to continue importing rice until the Philippines achieves complete sufficiency in the commodity and has assured that there is enough buffer stock for the lean months.

The country has an estimated 4- to 5-percent shortage in rice since the sufficiency rate stands at 96 percent, Agriculture Secretary Proceso Alcala said.

“Hangga’t hindi natin naaabot ang 100-percent rice sufficiency, plus buffer, mag-i-import tayo,” he told lawmakers during the budget briefing for the Department of Agriculture at the House of Representatives Tuesday.

According to the Office of the Presidential Assistant for Food Security and Modernization, the National Food Authority (NFA) has achieved a 15-day national average in the buffer stock for 2014.

The Philippines is one of the largest rice importers in the world. Since February 2015, the NFA has imported 750,000 metric tons (MT) of rice via government-to-government arrangements.

The NFA has been authorized to buy another P250,000 MT, particularly if the El Niño drought impacts on the harvest.

Even as the government is continuously working to achieve a 100-percent rice self-sufficiency by 2016, Alcala said the country will have to import rice to ensure enough buffer stock is at hand.

Under the Aquino administration, Alcala said the DA was able to increase rice self-sufficiency from 82 percent in 2010 to 96 percent last year.

The latest data from the United States Department of Agriculture show that the Philippines recorded the fastest production growth among the world’s rice producers in 2010 to 2014, with an average growth of 4.02 percent compared with the global average of 1.39 percent.

Also in 2014, the country achieved the highest palay production in history with 18.97 million MT at yield of 4 MT per hectare.

Of the P34.5 billion allotted to the agency’s key programs and projects, P7 billion will go to programs aimed at improving rice production while P2.9 billion has been earmarked for the high-value crops development program.

PHL among happiest countries in the world – Gallup poll