PHL to build pier in Spratlys 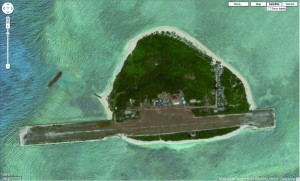 A Google Map aerial view of Pag-asa Island, one of the supposed "disputed" islands in Spratlys, but which the Philippines has claimed and where a small Philippine military contingent resides and who man the airfield.

DFA: â€˜What is ours is ours. Pag-asa Island is oursâ€™

â€œWhat is ours is ours. Pag-asa Island is ours… The Philippines exercises territorial sovereignty over the West Philippine Sea (Philippine-claimed areas of the South China Sea),â€ the Department of Foreign Affairs said in a statement.

The DFA said it would build the pier on the largest of the five Philippine-occupied islands, known as Thitu, but which it calls Pag-asa.

The Philippines, China, Taiwan, Vietnam, Malaysia and Brunei have competing claims over large parts of the South China Sea including the Spratly islands.

The territorial dispute over the waters, which are believed to sit atop vast deposits of gas and oil, has for decades been regarded as one of Asiaâ€™s potential military flashpoints.

â€œThe construction of a pier on Pag-asa Island is a clear exercise of Philippine sovereignty.â€

Tensions over the reputedly oil- and gas-rich territory have risen in recent months with the Philippines accusing China of aggressive actions.

This has included an incident where Chinese vessels fired on Filipino fishermen and harassed an oil exploration vessel in its waters.

The Filipino mayor of the Kalayaan group, Eugene Bito-onon, told AFP several government agencies had agreed to develop the pier on 37-hectare (91-acre) Thitu, which hosts about 60 Filipino civilians as well as troops.

Most of the residentsâ€™ food and other needs have to be shipped or flown in.

The cost and timetable for the project have not been finalized but Bito-onon said construction of a harbour will allow equipment and materials to be rolled off ships.

â€œOnce we have the pier, we can unload equipment for the improvement of the airstrip and the construction of other facilities and even tourists,â€ he said. 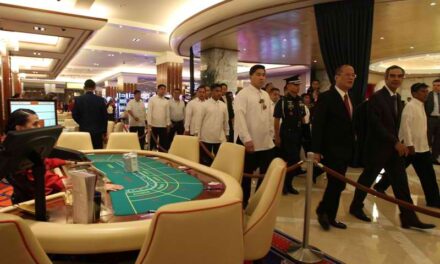