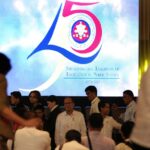 President Benigno S. Aquino III graces the 45th anniversary celebration of the Presidential Management Staff held at the Reception Hall of the Philippine International Convention Center in Pasay City on Thursday (August 20) with the theme: “Sustaining the Tradition of Excellence in Public Service.” (MNS photo)

MANILA (Mabuhay) – Malacañang on Saturday assured the public that the Department of Environment and Natural Resources (DENR) is doing what is needed to resolve the issue of the death of Philippine eagle “Pamana.”

This is amid a supposed threat against Mt. Hamiguitan’s status as United Nations Educational Scientific and Cultural Organization (Unesco) World Heritage Site.

The three-year old female Philippine eagle was found dead in the Mt. Hamiguitan Range Wildlife Sanctuary, which is a Unesco heritage site and protected area.

“I think DENR already released a reward to get to the bottom, really, of what happened to ‘Pamana,’” Deputy President Spokesperson Abigail Valte said over state-run Radyo ng Bayan.

“I’m sure that everyone wants to make certain that we are not delisted and that we do not lose that designation,” she added.

Environmental group Kalikasan People’s Network for the Environment (Kalikasan PNE) earlier criticized the government for not prioritizing conservation efforts. It said that unchecked poaching in the area was because of lack of funding and manpower.

Mt. Hamiguitan Range Wildlife Sanctuary was included in the World Heritage list in 2014 and was then recognized as an area that “provides critical habitat for a range of plant and animal species.”

“The property showcases terrestrial and aquatic habitats at different elevations, and includes threatened and endemic flora and fauna species, eight of which are found only at Mount Hamiguitan. These include critically endangered trees, plants and the iconic Philippine Eagle and Philippine Cockatoo,” a Unesco media release said.

Should a Doctor See That Muscle Strain?