PHL to miss tourism targets due to disasters 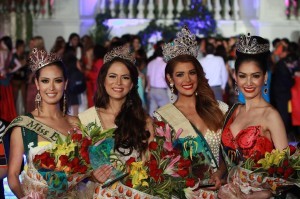 MissEarth2013 Alyz Henrich of Venezuela (second from right) has been crowned Miss Earth 2013 at the pageant’s finale held at Alabang, Muntinlupa City, in the Philippines. The coronation ceremony took place at the Versailles Palace and was telecastlive on Star World. Her court are composed of (from left) Katia Wagner of Austria (Miss Air), Catharina Choi of Korea (Miss Fire) and Punika Kulsoontornrut of Thailand (Miss Water) (From Miss Earth Facebook Page)

MANILA (AFP) – The Philippines is unlikely to hit its target of five million tourists this year due to damage caused by twin disasters, a tourism official said Saturday.

Killer Super Typhoon Haiyan hit on November 8 and a 7.1-magnitude earthquake on October 15, causing devastation in tourist areas which resulted in many cancelled reservations, said Domingo Enerio, chief of the government’s Tourism Promotions Board.

“We have been beset by huge challenges: the earthquake and typhoon. It was a double whammy for the Philippines,” he told AFP.

Tourist arrivals up to September have already reached about 3.6 million, up from 3.2 million in the same period last year, he said.

But the disasters will affect arrivals in the last three months which are the peak season for tourists, he warned.

The earthquake, which killed more than 220 people, shattered historic churches and tourism facilities and damaged roads in the central islands of Cebu and Bohol, both popular tourist destinations.

“These resorts are in that particular area which is very well known in international markets,” he said.

“It is not just one destination. The whole country’s image has been affected,” he added.

To counter this, the government and private sector are making an effort to tell tourists that there are many other attractions in the archipelago which have not been affected by the recent disasters, he said.

Despite the setbacks, the government is still sticking to its target of 10 million tourist arrivals in 2016, up from about 4.3 million in 2012, Enerio added.

“We can come back with a very strong campaign that will inform the world about how beautiful our country is. It still has a warm and welcoming people who are still hospitable to all foreigners,” he said.