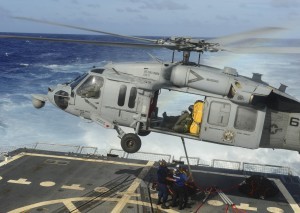 SAN ANTONIO (AFP) – Over 6,000 Philippine and US marines carried out a military exercise on a Philippine beach Sunday near a disputed reef occupied by Chinese ships which has become a potential regional flashpoint.

The American and Filipino troops, aboard five US amphibious, armored assault vehicles landed on the deserted beach facing the South China Sea in the latest in a series of combat exercises that began on September 29.

With the USS Germantown amphibious dock landing ship overseeing events from the sea, the Filipino and American troops rushed from their vehicles and took up combat positions.

“The US has always been a good ally of the Filipinos and if they need our assistance, we will be here for them and we think this exercise really reinforces that,” said Lieutenant Colonel Robert Rice, an officer of the US training staff.

However he declined to link the exercise to China’s growing restiveness in the region, saying such talk was “speculation”.

His Filipino counterpart, Lieutenant Colonel Dennis Hernandez said the exercises were intended to boost the capabilities of a marine amphibious brigade, based in the island of Palawan, the closest outpost to the South China Sea.

The exercise took place near a naval outpost on Zambales on Luzon island, 220 kilometers (137 miles) east of the disputed Scarborough Shoal on the South China Sea.

The shoal, a traditionally-rich fishing ground, has been effectively taken over by China following a tense year-long standoff with the Philippines in 2012.

China claims nearly all of the South China Sea, including waters near its smaller neighbors’ shores.

It has been accused of becoming increasingly aggressive in staking its claims to the sea, a vital shipping lane also believed to contain vast oil and mineral deposits.

Parts are also claimed by Brunei, Malaysia, Vietnam and Taiwan.

The poorly-armed Philippines has increasingly looked at the United States to boost its military capabilities amid the Chinese threat.

In April, the allies signed a defense pact that would see thousands of US troops stationed in the country in the next decade.

Duterte raps critics, says he might run for president

Solving Clean Water Challenges a Drop at a Time