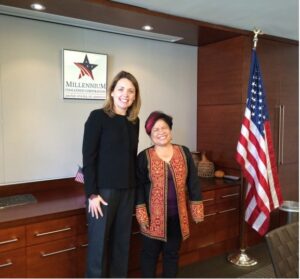 WASHINGTON, D.C. – In a meeting at the Headquarters of the Millennium Challenge Corporation (MCC) in Washington D.C. on 14 May 2015, MCC Chief Executive Officer Dana Hyde and Secretary Corazon Juliano-Soliman of the Philippine Department of Social Welfare and Development (DSWD) reaffirmed the strong partnership between the Philippine Government and MCC.

Secretary Soliman noted that the partnership contributes to and strengthens the country’s democratization process.  She cited MCC’s support for the Philippine Government’s community driven-development (CDD) approach in order to empower ordinary citizens to actively and directly participate in local governance. She lauded MCC’s support for the KALAHI-CIDDS (Kapit-Bisig Laban sa Kahirapan-Comprehensive and Integrated Delivery of Social Services) –  one of the three core social protection programs of DSWD in alleviating poverty.

Ms. Hyde, in turn, affirmed that MCC is “proud of the partnership” and acknowledged the hard work that the DSWD is doing to sustain the MCC projects through the Millennium Challenge Account-Philippine Compact. She also expressed interest to visit the Philippines before the end of the year.

Signed on 23 September 2010 in New York City and entered into force on 25 May 2011, the US$434 million First Philippine Compact is intended to allow poor communities to develop small-scale projects and manage assets in a sustainable way, facilitate increased commerce by reducing transportation costs, and increase the efficiency and sustainability of revenue collection through the redesign and computerization of business processes.  The Compact symbolizes the strong bilateral ties between with the Philippines and the United States.