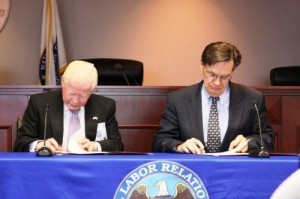 Ambassador Jose L. Cuisia, Jr. and NLRB General Counsel Richard Griffin sign the Memorandum of Understanding between the Office of the General Counsel of the NLRB and the DFA at a ceremony held at the NLRB Board Hearing Room on Wednesday, 22 October 2014. The MOU is aimed at educating Filipino workers and business owners on their rights to freedom of association and collective bargaining, as provided under the National Labor Relations Act, which is the basic US law governing labor relations. (Photo by the National Labor Relations Board)

WASHINGTON, D.C.—The Philippines has taken another step in fulfilling its mandate to look after the interest and welfare of Filipinos abroad by partnering with the United States in reaching out and educating members of the Filipino-American Community about their rights and responsibilities as employees and employers.

In a statement, the Philippine Embassy said the latest partnership between the Philippines and the US was formalized on Wednesday with the signing of a Memorandum of Agreement between the Department of Foreign Affairs (DFA) and the US National Labor Relations Board (NLRB).

The Embassy said the agreement, which was signed by Ambassador Jose L. Cuisia, Jr. and NLRB General Counsel Richard Griffin, seeks to strengthen bilateral efforts to provide Filipino workers, their employers, and Filipino business owners in the US with information, guidance, and access to education regarding their rights and responsibilities under the National Labor Relations Act. 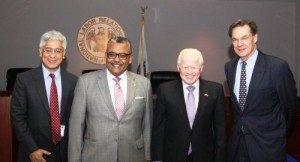 Ambassador Jose L. Cuisia, Jr. (3L) poses with NLRB Chairman Mark Pearce (2L) and NLRB General Counsel Richard Griffin (rightmost) after the signing of the MOU between the Office of the General Counsel of the NLRB and the DFA held at the NLRB Board Hearing Room on Wednesday, 22 October 2014. Joining them in the picture is Consul General Emil Fernandez (leftmost). (Photo by the National Labor Relations Board)

“We welcome the opportunity of entering into worker-related bilateral agreements such as this MOU, as a step forward in the fulfillment of our mandate to protect worker rights,” Ambassador Cuisia said in his remarks during the signing ceremonies.

Ambassador Cuisia, at the same time, commended the US Government for strengthening its collaborations with the Philippines and other countries that have large worker populations in the US.

According to the Ambassador, the MOU with the NLRB is the third agreement the Philippines has entered into with US labor agencies. The Embassy had previously signed agreements with the Wage and Hour Division (WHD) and the Occupational Safety and Health Administration (OSHA) of the Department of Labor.

The NLRB is an independent agency responsible for enforcing the National Labor Relations Act, the primary law governing relations between employers and employees in the private sector. The Act guarantees workers the right to join together, with or without a union, to improve their wages and working conditions, or to refrain from such activities. Employers and employees alike are protected from unfair labor practices.

“As we partner with you in helping foster greater awareness among Filipino workers of their rights to freedom of association and collective bargaining, we hope to do our part in promoting the essence of dignity at work which they deserve, while at the same time empowering them with decision-making capabilities available to them in a free and open society,” he said.

“This initiative is an affirmation of the US government’s advocacy for human rights and a demonstration of their appreciation for the Filipinos’ contribution to the US economy,” Ambassador Cuisia added.

The contribution of the Filipino-American Community to the US economy was likewise cited by NLRB Chairman Mark Pearce in his remarks. NLRB General Counsel Griffin said the MOU encompasses the values and aspirations commonly shared by the Philippines and the US.

Consul General Fernandez said that under the framework, the NLRB and the Philippine Embassy in Washington, D.C., as well as NLRB Regional Offices and Philippine Consulates in New York, Chicago, Los Angeles, San Francisco and Honolulu, will cooperate to provide outreach, education, and training, and to develop best practices.

“The Embassy values these partnerships as a vital component of its Assistance-to-Nationals efforts,” he said.

Present at the event were NLRB officials as well as guests from the US Department of Labor and the Equal Employment Opportunities Commission. Victoria Navarro, immediate past president of the Philippine Nurses Association of America, also attended the ceremonies.

The event was witnessed via video conference by Consuls General Mario de Leon of the Philippine Consulate General in New York; Leo Herrera Lim in Los Angeles; and Henry Bensurto in San Francisco and was followed by respective engagements at the regional level.

WEF is a chance to showcase PHL growth story — Drilon