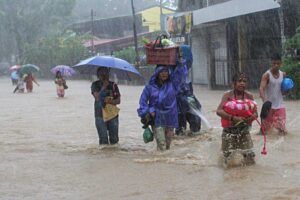 Residents clutch to their belongings as they wade along a flooded road after tropical storm Egay hit the coastal town of San Fernando, La Union on Monday. All sea travel and fishing operations in the north were suspended as sea waves reached as high as 4 meters. (MNS photo)

They forecast typhoon ‘Ineng’ (international name ‘Goni’) to exit the Philippine Area of Responsibility (PAR) around Monday (Aug. 24), decreasing effect of this tropical cyclone (TC) on the rain-driving southwest monsoon or ‘habagat’ prevailing in the country.

“There’s also neither a new TC nor LPA that can affect the country next week,” said forecaster Aldczar Aurelio from the Philippine Atmospheric, Geophysical and Astronomical Services Administration (PAGASA).

He noted the Pacific TC with international name ‘Atsani’ after ‘Ineng’ is too far to affect the Philippines.

In its 11 a.m. severe weather bulletin released Saturday (Aug. 22), PAGASA located Ineng at 165 kilometers northeast of Calayan in Cagayan province or 70 kilometers east of Batanes province’s Basco municipality as of 10 a.m. of this same day.

“Metro Manila’s weather might improve by either Monday or Tuesday (Aug. 25) with anticipated exit of ‘Ineng’ from PAR,” he noted, however.

The enhanced ‘habagat’ will further dump rains in Central and Northern Luzon until the middle of next week but weather there is expected to begin improving afterwards with anticipated exit of Ineng, he continued.

He said PAGASA also forecast improving weather in the Visayas next week, he noted.

“We expect the entire country to have good weather by either Friday (Aug. 28) or Saturday (Aug. 29),” he said.

“The typhoon accelerated slightly as it continues moving in a north-northeast direction,” PAGASA said.

PAGASA forecast Ineng to be 740 kilometers northeast of Basco on Monday morning, already outside PAR. (MNS)

Envoy: US to stand by PHL amid ‘threats’

Cancer and pain: What you need to know