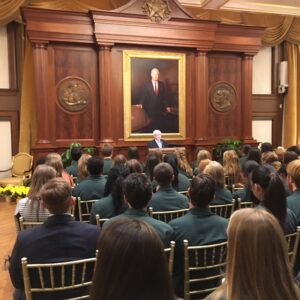 WASHINGTON, D.C – Exceptional high school students from across the United States and other countries learned about positive developments in the Philippines and its efforts to become climate-resilient, climate-smart, and food-secure.

Some 200 high school students are participating in the three-day Global Youth Institute hosted by the World Food Prize Foundation in Des Moines, Iowa from 15 to 17 October 2015. Throughout the event, participants present and discuss their findings with international experts and peers, connect with other students from around the world, tour leading industrial and research facilities, and take part in symposium discussions with experts in science and industry.

Students are also given the opportunity to meet global leaders. This year, Ambassador Jose L. Cuisia, Jr. addressed the participants on behalf of President Benigno S. Aquino III on the first day of the event.

“I would like to commend the World Food Prize Foundation for having a program such as the Global Youth Institute to inspire the next generation to study and work in fields related to global agriculture. By improving agricultural productivity and incomes, promoting fair trade and better nutritional practices at all levels, immediate access to food by those who are most in need can be enhanced,” said Ambassador Cuisia.

According to the envoy, food security is an urgent and important goal of the Philippines, a country with a population density greater than that of the United States, facing increasing climate change threats.

“You can therefore imagine the challenge faced by the Philippines in feeding more people given limited amount of land, while our island nation faces threats from more intense tropical cyclones, drastic changes in rainfall patterns, sea level rise and increasing temperatures.

“It is in this vein that our country strives to be climate-resilient and climate-smart in order to be food-secure and to develop sustainably,” said Ambassador Cuisia.

In his speech, the Ambassador also underscored the importance of inclusive economic growth in working toward and sustaining food security, and encouraged the participants to do their part in ensuring people of the world have access to food.

“Food security goes beyond increased food production. It involves enhancing the competitiveness of economies’ agriculture and fisheries and fair policies that promote sustainability and growth among the stakeholders particularly small holders such as women, farmers and fishermen,” said Ambassador Cuisia.

He added, “Attaining and sustaining food security for everyone is not an easy task. The world needs motivated individuals like yourselves to help provide solutions to the difficult problems that societies face to be food secure. I am confident that if we all work towards a collective goal, we can succeed.”

The World Food Prize honors outstanding individuals who have made vital contributions to improving the quality or availability of food throughout the world. These individuals have made contributions in any field involving world food supply including agriculture, science and technology, manufacturing, marketing, nutrition, economics, poverty alleviation, political leadership, and the social sciences.

The Global Youth Institute was established in 1994 by the World Food Prize Foundation, with the primary goal of increasing awareness of the World Food Prize mission among the youth. Every year in mid-October, around 200 high school students are selected to participate in the Global Youth Institute, which has a program of activities revolving around finding solutions to pressing food security and agricultural issues. ###

Catholic Philippines steps up security for All Saints’ Day