Hong Kong, China, AFP, Thursday 4/9/2015 – The Filipina mother of a teenager who plunged to her death from an upmarket Hong Kong apartment was released on bail Thursday after being charged with neglect, as her lawyer told of the “unraveling” of their happy family life.

Herminia Garcia emerged from court hand in hand with her British partner Nick Cousins, a businessman, who was also arrested after the 15-year-old’s fatal 21-storey fall.

Although police said there was “no suspicious element” to the tragedy, they detained the teenager’s parents on suspicion of “ill-treatment or neglect of a child or a young person”.

Cousins, 58, is the managing director of the Hong Kong office of British multinational Jardine Lloyd Thompson (JLT), one of the world’s leading insurance brokers.

He is already on bail and has not yet been charged with any offence, while Garcia, who goes by the name Grace, was charged with neglect.

The 53-year-old was also charged with overstaying her visa, while Cousins is being investigated for aiding or abetting the overstay. The couple are not married.

Garcia is a former domestic helper, according to local media.

The couple also have a younger daughter.

Garcia appeared before magistrates in Hong Kong Thursday where proceedings were interpreted for her in Tagalog – a Philippine language.

Cousins accompanied her, sitting in the public gallery, often with his head bowed.

The charge sheet said that Garcia’s treatment of an unnamed 14-year-old “Child X” was likely to cause “unnecessary suffering”.

No further detail of the neglect charge was given.

Garcia’s lawyer Christopher Morley told the court how Garcia had lived a “happy normal life with her de facto husband” before her daughter’s death, which had led to the “unravelling situation” for the family.

He asked that Garcia be released on bail on humanitarian grounds.

“This lady is grieving from the loss of her beloved daughter. If she is remanded in custody, she will be denied the support of her family,” he said.

Morley also countered local media reports that the teenager and her younger sister had never been to school, saying that they had “received a proper education” at what he described as a learning centre.

“The court has decided the family should remain together,” said Morley.

“We would ask for respect for their privacy at this difficult time.”

They were driven away in a Mercedes without speaking to reporters.

The 15-year-old fell from the apartment block in Repulse Bay early Tuesday morning.

Police said the teenager was pronounced dead at the scene after a security guard heard a loud noise and she was found lying on the ground.

“We learned that the subject was probably upset about some daily life issues,” a police spokesman said.

Her younger sister was initially taken to a children’s home, and the police are seeking a protection order for her.

She was released back into her family’s care late Wednesday while the social welfare department produces an assessment report on the case.

The South China Morning Post reported that the girls’ births had never been registered, despite attempts by the immigration department to track them.

Garcia had been working as a domestic helper in Hong Kong from 1990 and began living with Cousins in 1994, the newspaper said. 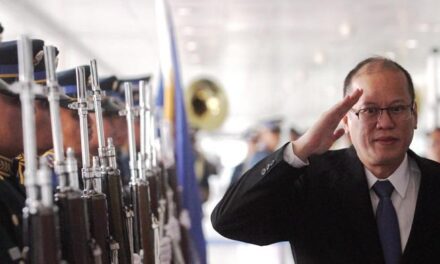