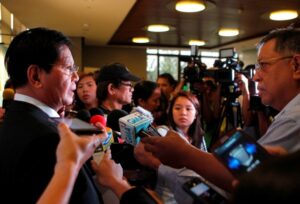 MANILA (Mabuhay) – Former Senator Panfilo “Ping” Lacson said he remains undecided about  his plans in  2016 but said he would make a decision either in August or September this year.

“Count me among the undecided. So many factors to consider,”  Lacson said in a text message on Thursday.

“August or September this year should be a practical time to decide,” the former presidential candidate said in a separate text message.

A manifesto signed by 35 retired police and military officials appeared in a full-page ad of the  Philippine Daily Inquirer  urging both   Senator Grace Poe and Lacson to run  in tandem for higher office  in 2016.

Though he and Poe are qualified to hold a national position, the former senator said neither of them have decided on anything yet.

“We both haven’t decided on anything at this point and in fact have not talked about politics and political plans.  I’d rather leave it at that,”  Lacson further  said. (MNS)