Pinoy boxers sweep foes in their US debut 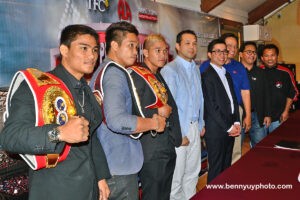 THE Philippines vs World boxing event in Los Angeles turned out to be as explosive as it has been promoted, resulting in three breathtaking knockdowns and two other fights filled with  fierce exchanges of blows – all of them ending in the victory of Filipino pugilists.

Mark “Magnifico” Magsayo lived up to his moniker, needing only two minutes to give Mexican Yardley Suarez his first taste of defeat in the latter’s professional career.

Magsayo went in with a flurry of punches as the bell rang, most of them finding their marks on Suarez’s head and body. The Mexican went down but he was able to beat the count. But Magsayo gave Suarez no quarter when he stood up and released another flurry of punches. An upper cut landed on the chin of the Mexican boxer at the end of the outburst.

Jason Pagara dropped Nicaraguan Santos “El Toro” Benavides thrice in the second round, enough to get the referee stop the fight. He improved his record to 32-0.

Pagara aggressively pursued Benavidez in the first round, landing a couple of good shots in the head and body of his opponent.

An uppercut and a left hook downed the Nicaraguan fighter for the first time in Round 2. Benavidez beat the count but he went down again after receiving a huge blow to the body. He got up, only to be caught by a huge left from Pagara with a couple of seconds remaining in the round.

Gonzales was knocked down by Albert while the 2nd round was expiring.  The Nicaraguan fighter was able to recover and fought back with crisp jabs, which gave Albert a hard time in the succeeding rounds.

But in sixth round, Albert landed a jab on Gonzales’ face and followed it up with a combination that sent the Nicaraguan fighter on the ropes. He was counted out this time around.

Albert extended his undefeated run to 25-0 with 18 knockouts.

For the main event, Donnie “Ahas” Nietes hard to work hard against Mexican Juan “Pinky” Alejo to retain his WBO light flyweight title via a 21-round unanimous decision.

The victory extended put Nietes record at 37-1-4 with 21 KOs. He remains the Philippines’ longest reigning champion in boxing history.

During the post-fight press conference, Nietes said Alejo was able to hurt him somewhere between rounds 3 or 4, just as the same time when he had hurt his right hand.

Nietes said he thought he had Alejo in the 11th round but was able to survive the round.

Despite being ahead in the score card, Nietes continue to unload on Alejo in the 12th and last round. The exchanges of blows continued until the bell sounded off the end of the round.

Equally impressive was the performance of Bruno Escalante against Mexican Nestor Ramos in a six-rounder opener to the event.  Escalante won via unanimous decision in another toe-to-toe clash that also threw into excitement the Filipino majority crowd at the Stubhub Center in Carson City on Saturday night.

Nietes, Magsayo and the Pagara brothers all debuted in the US through the promotion partnership of ALA International, ABS-CBN Sport + Action and TFC, a global brand that distributes premium and on demand channel showing Filipino content on multiple platforms.

Life After the KO