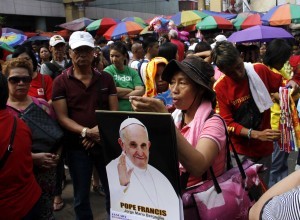 A vendor joins a crowd of churchgoers outside the Quiapo Church in Manila to sell calendars bearing the photo of Pope Francis on Friday (Jan. 2, 2015). The Pontiff is arriving in Manila on Jan. 15, 2015 for a four-day Apostolic and State Visit to the Philippines. (MNS photo)

MANILA (Mabuhay) – The Filipinos’ Catholic faith may have drawn Pope Francis to visit the country even before the Bohol earthquake and super typhoon Yolanda, a seminarian researching on his life said Wednesday.

Bro. Joseph Zaldivar of the San Jose Seminary in Ateneo de Manila University said the Philippines’ place as the center of Catholic faith in Asia may have been a consideration for the Pope, even before the natural disasters that cut across the Visayas in late 2013.

In a papal flight in July 2013, before the Bohol earthquake and super typhoon Yolanda, Pope Francis mentioned that he had received an invitation to come to the Philippines, as well as to Sri Lanka, the two countries in Asia that he will be visiting this month.

“I have been invited to go to Sri Lanka and also to the Philippines. But I must go to Asia. Because Pope Benedict did not have time to go to Asia, and it is important,” the Pope said at the time.

His first visit to Asia, however, was in South Korea in August 2014, where he spent five days meeting some of the country’s five million Catholics.

Pope Francis’ trip there also marked the first papal visit to Asia since 1999.

For his visit to the Philippines on January 15 to 19, the Pope will be spending a day in Tacloban City and Palo to meet with survivors of natural disasters.

Most of his events, however, will be in Manila, where he will meet with the youth, religious and government leaders, and selected families.

His trip coincides with the 20th anniversary of the World Youth Day, celebrations for which was held in Manila in 1995, attended by his predecessor, now-Saint John Paul II. (MNS)