Thousands of mourners gathered at a remote hill in the southern province of Maguindanao where the carnage took place to pay their respects and demand the powerful Muslim clan accused of orchestrating the massacre be held to account. 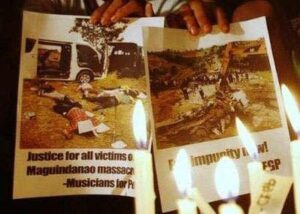 “I am praying by the will of God that we can get justice,” Tom Teuto, 50, who lost his sister and 13 other relatives in the massacre, told reporters at the site on the outskirts of the provincial capital of Shariff Aguak.

The Ampatuan clan, which had governed Maguindanao since 2001, allegedly orchestrated the murders of at least 57 people in a futile bid to stop a member of a rival Muslim clan from running for the provincial governorship.

Those killed were relatives and supporters of the rival, Esmael Mangudadatu, who were to have filed his election nomination papers, as well as at least 32 local journalists who had traveled in the convoy.

Their bodies were later found in shallow pits, and witnesses who have testified in an ongoing trial in Manila for Andal Ampatuan Jr., the clan patriarch’s son and namesake, said he gunned down most of the victims.

President Benigno Aquino declared Tuesday a “day of remembrance” and ordered government employees to wear black to symbolize unity with the victims’ relatives.

“Today we again offer our condolences to the families of the victims and vow to do everything in our power to achieve a timely resolution of this case and ensure this does not happen again,” Aquino said in a statement.

At the massacre site, religious leaders led prayers during an emotional service in which white doves and balloons were released to remember the victims.

Radio and television stations across the country also silenced their broadcasts for 58 seconds at 7 a.m. to remember those killed and urge authorities to speed up the prosecutions of those accused.

Although the death toll is officially 57, a 33rd journalist, Humberto Mumay, is believed to have been killed as well.

Mumay’s death would bring the toll to 58 but the Ampatuans are being prosecuted for only 57 murders because Mumay’s body has not been found and he is officially declared as missing.

Ampatuan Snr and Jr., and four other clan leaders, have been charged and are behind bars.

But Ampatuan Jr. is the only clan leader whose trial has begun and there are fears the court proceedings in the Philippines’ notoriously over-burdened justice system could last for years.

Meanwhile, many members of the Ampatuans’ private army remain on the loose and allegedly can receive calls from their leaders to stage attacks in an effort to eliminate or intimidate witnesses.

“They remain very dangerous and can receive instructions any time (from the Ampatuan leaders) through mobile phones,” Mangudadatu, the rival politician and now provincial governor, told AFP.

Human rights groups have said at least one key prosecution witness has been killed.

The Ampatuans deny being involved in any killings.

The Ampatuans had ruled Maguindanao with the support of then president Gloria Arroyo, who supplied the family’s private militia of up to 5,000 men so they could be used as a proxy force against Muslim separatist rebels.

However, rights watchdogs say Aquino, who took office on June 30 this year, must also address the bigger picture of abolishing all private armies run by politicians across the country.

The government still funds and arms some of these militias to supplement the under-resourced military, and critics say Aquino has either been unwilling or unable to disband the militias.

“The fact that private armies continue to operate a year after the Maguindanao massacre is an affront to the victims and an invitation to further disasters,” said Amnesty International’s Asia director, Sam Zafiri.

PH has to ‘carefully act’ on Mary Jane Veloso’s case