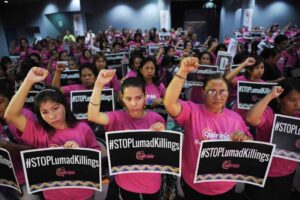 Activists from women’s rights group Gabriela pose with placards to protest the killings of lumad leaders in Surigao del Sur on Thursday. Left-wing groups raised concern on the involvement of government militia in the killing at least 3 people in the region. (MNS photo)

In a 13-page complaint filed with the Office of the Ombudsman, Volunteers Against Crime and Corruption (VACC) chairman Martin Diño and a private individual from Puerto Princesa City, Oscar Lapida Jr., alleged that Hagedorn and four other former city officials committed plunder as defined under Republic Act 7080 or the Anti-Plunder Law, violation of Section 3 (e) of Republic Act 3019 or the Anti-Graft and Corrupt Practices Act and malversation thru falsification of public documents.

In their complaint, Diño and Lapida said that between 2011 to 2012, Hagedorn, in an alleged “conspiracy” with the four other respondents, reimbursed from the city government through a series of transactions a total of P60,567,071 with himself as the sole payee.

The complainants said the reimbursements were done “despite the lack of official receipts, vouchers, or other documents to support and/or authorize payment of claim for reimbursable expense,” with Hagedorn claiming to have spent his own money for various  purposes that were supposedly part of the official business of the city government.

“Hagedorn managed to withdraw, obtain, receive and reimburse himself from the coffers of the CGPP (City Government of Puerto Princesa) the total amount of P60,567,071, thereby unjustly enriching himself at the expense and to the damage and prejudice of every resident and taxpayer of Puerto Princesa City, CGPP and the Republic,” the complainants said.

Based on the complaint, the questioned amount was reimbursed by Hagedorn through withdrawals from the city’s three bank accounts with Land Bank and two accounts with the Philippine Veterans Bank.

Diño and Lapida cited as basis for their complaint a Commission on Audit (COA) report on Puerto Princesa City government for 2012, which noted several irregularities in reimbursements from the city’s funds.

Based on the complaint, reasons cited by Hagedorn in his reimbursement claims included “maintenance and other operating expenses,” “financial assistance,” “donations,” “expenses for special activities” such as Ms. Earth Philippines beauty pageant and “gasoline, machinery and equipment, meals and snacks, advertising expenses.”

In all the reimbursement claims, Hagedorn allegedly stated that he has spent his own money for the supposed official expenses of the city government.

“Worth emphasizing is the fact that respondent Hagedorn is neither a creditor to whom the money is due nor a disbursing officer who can make an official disbursement, in violation of Section 39 of Presidential Decree No. 1445 (State Audit Code),” the complaint read.

The complainants further questioned the alleged irregularities in the release of the checks for Hagedorn’s reimbursement, noting in one day alone, on March 1, 2011, Hagedorn reimbursed himself through four checks totaling P5,375,749.

“In sum, the releases of the proceeds of the checks to respondent Hagedorn is tainted with irregularities and misuse of funds in connivance with other government employees,” the complainants said.

“[It was] Hagedorn himself as the local chief executive who personally, or through respondent Rocamora, approved the disbursement for which the checks were eventually issued in respondent Hagedorn’s name as payee,” they added.

The complainants further asked the Office of the Ombudsman to order the return of the P60.567 million funds allegedly plundered by Hagedorn and the other respondents to the city government.

They also asked the Ombudsman to freeze the assets of all the respondents while the anti-graft body is investigating the complaint “to prevent a vacuous victory and thus prevent them from evading liability by disposing or hiding all their assets.”

Meanwhile, in a chance interview after the filing of the complaint, Diño stressed that their move has nothing to do with the coming 2016 elections.

Hagedorn is facing another plunder complaint before the Ombudsman filed in April of this year by three private complainants who were believed to be supporters of incumbent Puerto Princesa Mayor Lucio Bayron.

The case also stemmed from the alleged anomalous reimbursements made by Hagedorn from 2008 to 2010 during his term as mayor amounting to P65.7 million.(MNS)