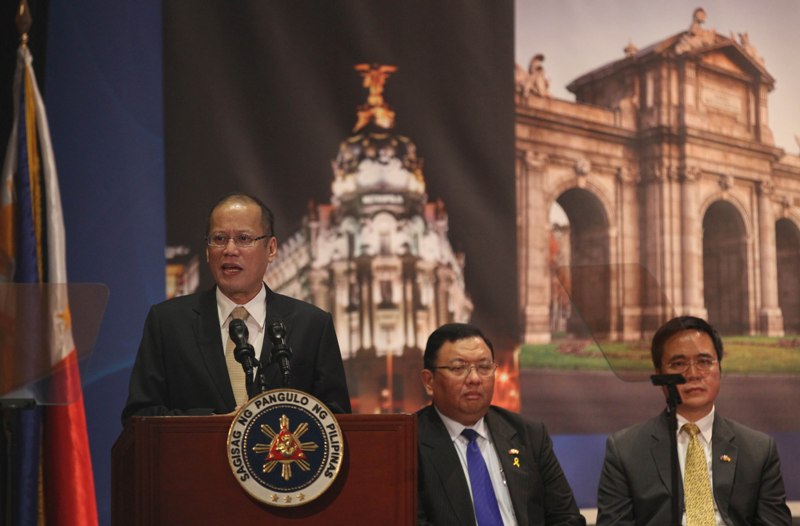 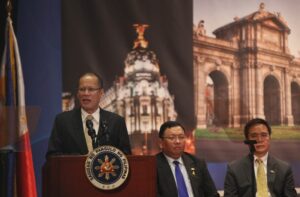 Philippine Aquino delivers his message during his meeting with the Filipino community at the Colegio Nuestra Senora de las Maravillas in Madrid, Spain, on Sunday, September 14, 2014, at the sidelines will first visit Spain, then proceed to Belgium, France and Germany for two days each. In New York City, President Aquino will highlight the country’s vulnerability to weather disturbances as well as the Philippine government’s initiatives in addressing climate change when he attends the Climate Summit 2014 in New York on September 23 (MNS photo)

MANILA, Sept 17 (Mabuhay) — Even while he is in Europe, President Benigno Aquino III is on top of government preparations for a possible eruption of Mayon Volcano in Albay, Malacañang said Wednesday.

Presidential spokesman Secretary Edwin Lacierda said at a press briefing that Aquino is in touch with National Disaster Risk Reduction and Management Center (NDRRMC) officials for updates on the volcano’s status.

He also assured that the national government will provide aid to the Albay government officials, led by Governor Joey Salceda, “in case they ask for our assistance.”

Albay has already been placed under a state of calamity due to Mayon Volcano’s heightened activity in the past days.

Close to 3,000 families have so far been evacuated from the six-kilometer permanent danger zone around the volcano. Some 4,200 families are also set to be evacuated at the extended danger zone.

Aquino is currently in Belgium for the second leg of his Europe visit. He is scheduled to fly on Wednesday afternoon to France, where he will meet with top government officials, business groups and the Filipino community in Paris. (MNS)

Want to be happy? Step away from the junk food: study