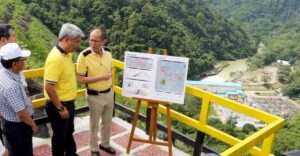 President Benigno S. Aquino III is being brief by MWSS Administrator Gerardo A.I. Esquivel during his inspection of the Angat Dam and Dyke Strengthening Project at the Angat Hydroelectric Power Plant Hilltop in Norzagaray, Bulacan Wednesday, (July 22). The Project involves the strengthening of the Angat Dam and Dyke in order to ensure its stability and safety to withstand the potential risk posed by possible seismic activity associated with the West Valley Fault. (MNS photo)

NORZAGARAY, Bulacan  (Mabuhay) — As he draws close to revealing his anointed one, President Benigno Aquino III told voters on Wednesday not to elect candidates who put self-interest over the country’s welfare.

In a speech after inspecting the Angat Dam, Aquino warned the public against politicians who give empty promises, and who will take advantage of their posts for personal gain.

At the same time, the President said the public should choose a leader who stays true to his word.

Once again, Aquino said the next president should continue his reforms.

President Aquino has been conducting meetings over the past weeks, as his self-imposed deadline for endorsing a presidential bet nears.

Aquino earlier said he will reveal his presidential pick this month after his final State of the Nation Address next week.

The President has repeatedly met with independent Senator Grace Poe, who recently emerged as top pick for next president based on pre-election preference polls.

He also sat down with Interior Secretary Mar Roxas, who is presumed to be the Liberal Party (LP) standard-bearer for the 2016 polls, and Senator Francis Escudero, who is considering teaming up with Poe for the upcoming polls.

Even after these meetings, however, several politicians privy to the talks–including Poe, Abad and Belmonte–indicated that no consensus has been reached on a single administration ticket for 2016. (MNS)