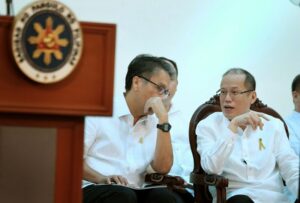 MANILA (Mabuhay) — A week after endorsing Interior Secretary Mar Roxas as his presidential bet for 2016, President Beningo Aquino III on Friday continued heaping praises on the Cabinet official, this time for his role in reforming the police force.

In a speech during the 114th Police Service anniversary rites at Camp Crame, Aquino said Roxas provided “exemplary leadership” to the Department of Interior and Local Government (DILG).

The President commended Roxas for taking on the DILG post even on short notice, after former Interior Secretary Jesse Robredo died in a plane crash in 2012.

He further enjoined the PNP to continue the reforms started by Roxas, who is set to vacate the DILG post soon.

After receiving Aquino’s endorsement, Roxas tendered his resignation as DILG chief, but the President asked him to stay longer to finish some projects, particularly the PNP equipment upgrade.

LP secretary general Rep. Mel Senen Sarmiento, whose name is being floated as Roxas’ possible replacement in the DILG, was present during the PNP event. (MNS)