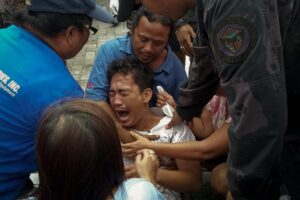 — A survivor of passenger ferry M/V Kim Nirvana, that capsized near the shore in Ormoc, Leyte, cries after being rescued Thursday. At least 36 people were killed after the passenger ferry bound for Camotes Islands with close to 173 people on board capsized 200 meters from the shore.(MNS photo)

MANILA, July 3 (Mabuhay) — President Benigno Aquino III has ordered the Philippine Coast Guard (PCG) to conduct a speedy and thorough investigation on the capsizing of motorized banca off Ormoc City on Thursday, which has left at least 39 individuals dead.

In a text message on Friday, deputy presidential spokesman Abigail Valte said the President expects the PCG to find out what caused the incident.

Valte also said that the PCG’s Maritime Casualty Investigation Team is alread “pursuing various avenues of inquiry, including possible overloading, capability of the captain and its officers, load capacity of the vessel, and others.”

“We expect a thorough investigation on the part of the PCG,” the Palace official said.

On Thursday, the MBCA Kim-Nirvana-B carrying 173 passengers and 16 crew members capsized minutes after leaving the port of Ormoc. At least 39 have been confirmed dead from the incident, while 18 remain missing.

A preliminary investigation points to human error as the cause of the capsizing. The wooden hulled ferry supposedly made a sharp right turn soon after it left port, and passengers crowded the right side of the vessel, causing it to tilt slowly before capsizing.

PCG spokesman Commander Armand Balilo likewise said the boat did not seem to be overloaded.

Valte, for her part, extended condolences to families of those who died in the incident.

“We mourn with the families of those who lost their loved ones in the incident and assure them a speedy and objective investigation,” she said. (MNS)