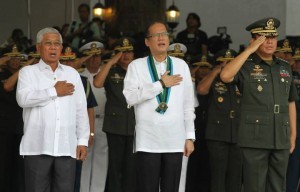 MANILA (Mabuhay) – A spokesman of President Aquino rejected Monday a statement of the United Nationalist Alliance that the President’s speech defending the Disbursement Acceleration Program (DAP) was a desperate act meant to preempt the decision of the Supreme Court on the matter.

“Walang batayan at walang katotohanan,” he said in a text message.

He said the President chose to talk on nationwide television because he had been explaining the DAP to sectoral audiences such as professionals and the Foreign Correspondents Association of the Philippines (FOCAP).

In his speech last Wednesday, Aquino lashed back at his critics and said he is not a thief that would steal the pork barrel funds.

Aquino also took a swipe at politicians who have been accused of misusing the Priority Development Assistance Fund (PDAF), saying they have not adequately explained and address accusations against them.

For his part, Bayan Muna Rep. Neri Colmenares said he was disappointed by Aquino’s speech, noting that the President could simply have said that he would abolish lump sum funds and itemize the use of pork barrel funds.

He rejected Aquino’s statement that the anti-pork barrel movement was being fooled by his critics.

He said that if the President’s intention was to assuage the Supreme Court about the use of the DAP, there will still be a problem since many officials have been jailed for realigning savings and unprogrammed funds of government agencies.

He said the issue of the pork barrel was about patronage politics since the funds can be given to allies and not to critics. “This is as evil as graft and corruption,” he said.

Coloma said the Palace is willing to work with Congress to ensure greater transparency and accountability of public funds.

He also denied that the speech was done to stave off a decline in the President’s approval ratings.

“It is not a popularity game but doing right by our people and doing what he promised,” he said. (MNS)

An overview of family-sponsored immigration