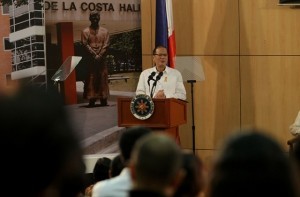 MANILA, Aug 23 (Mabuhay) — President Aquino on Friday said it is now time to abolish the priority development assistance funds (PDAF) or the pork barrel system in the aftermath of the alleged P10 billion pork barrel scam.

He said the Palace will craft a new mechanism to meet the needs of various sectors in a way that is transparent and fair. He said each sector will get a fair share of the national budget for health, scholarships, livelihoods and local infrastructure.

He said government funds will no longer be coursed to non-government organizations and government-owned and controlled corporations that were used in the pork barrel scam.

He said funding for consumable “soft” projects such as fertilizer, seeds, medical kits, false teeth and training materials will now be prohibited.

Senate President Franklin Drilon and House Speaker Sonny Belmonte were beside the President when he made the announcement.

The President made the announcement ahead of an anti-pork barrel rally on Monday. The movement, which started on social media, has gotten an overwhelming response from civil society groups.

In the press briefing, Aquino said he wants cases to be filed against officials linked to the P10 billion PDAF scam.

He also said he does not agree with Senate Minority Leader Juan Ponce Enrile’s proposal to scrap all pork barrel allocations and lump sum allocations, saying some funds cannot be itemized.