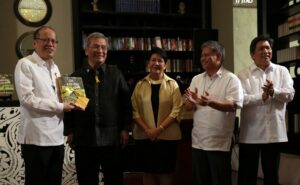 President Benigno S. Aquino III receives a copy of the book entitled “The Aquino Legacy: An Enduring Narrative” from the authors Elfren Cruz and Neni St. Romana Cruz during the book launching at the Writers’ Bar of the Raffles Hotel in One Raffles Drive, Makati Avenue, Makati City on Thursday (November 26). Also in photo are Education Secretary Armin Luistro and Communications Secretary Herminio Coloma. (MNS photo)

He said the Philippines has been chosen to lead the developing countries’ forum that was organized way back in 2009.

Aside from leading some activities that have been lined up for the COP in France, Aquino is also set to meet with business groups and individuals in Paris to strengthen ties in the field of trade and commerce.

An earlier report said Aquino will make report on the country’s accomplishments in mitigating the effects of climate change when he addresses the 21st COP in Paris next week.

As world leaders are only given three minutes to speak during the forum, Aquino will be highlighting “what the Philippines had done, also what do we want in the Paris agreement, as well as what we would like to do further,” said Assistant Secretary Joyceline Goco, deputy executive director of the Climate Change Commisson.

Goco said the relevance of climate change on human rights, especially that of women and children, and indigenous peoples will also be considered.

Aquino will be among 147 world leaders expected to participate in the COP21, which will be held in Le Bourget in the suburb of Paris, beginning November 30 until December 11.(MNS)

Group calls on Pope Francis to speak out for OFWs