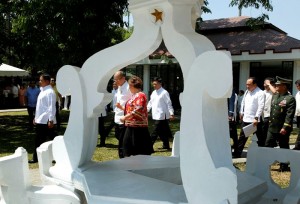 President Benigno S. Aquino III is received by National Historical Commission of the Philippines (NHCP) chairperson Dr. Maria Serena Diokno upon arrival for the inauguration of the Museo ni Emilio Aguinaldo at the Emilio Aguinaldo Shrine in Kawit, Cavite on Friday (March 20). The museum chronicles the life and times of Aguinaldo, especially during the revolution against Spain and war against the United States. (MNS photo)

Cojuangco’s death was confirmed by House Majority Leader Neptali Gonzales II, who said the lawmaker died of aneurysm, based on initial information they received.

Enrique is a brother of SMC chairman and CEO Eduardo “Danding” Cojuangco, himself a former congressman of the district. The Cojuangco brothers are uncles of Gilberto, former defense secretary and defeated presidential bet in the 2010 elections.

He is a first cousin of the late President Corazon Aquino, the incumbent president’s mother. He won the congressional seat in the first district of Tarlac in the 2010 and 2013 elections.

In Congress, Enrique Cojuangco pushed for the legislation of House Bill 5286 or the proposed Philippine Competition Law, which seeks to abolish unfair trade practices and monopolies.(MNS)