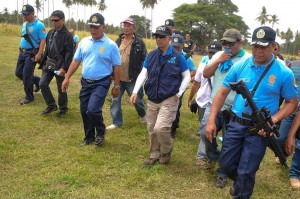 Members of the police Board of Inquiry (BOI) led by Chief Supt. Benjamin Magalong (3rd right) arrive at the scene of the clash in Tukanalipao, Mamasapano town in Maguindanao on Tuesday. The BOI is tasked to investigate the death of 44 police commandos, 18 rebels, and six civilians in the area. (MNS photo)

MAMASAPANO (Mabuhay) — The Philippine National Police Board of Inquiry may investigate allegations that a Special Action Force trooper killed defenseless Moro Islamic Liberation Front fighters in a mosque on Jan. 25 but only as a “collateral issue.”

P/Dir. Benjamin Magalong, PNP BOI chair, said Tuesday that the primary purpose of the inspection of the clash site was to find out the factors that may have affected judgment calls made during Oplan Exodus, the SAF operation against two international terrorists in the area.

Magalong said he wanted to check on the story but that there was no way to get to the mosque and there were no guides to that area.

He added the BOI is not a prosecutorial body. “Our purpose is fact finding (on Oplan Exodus),” he said.

The troopers were then on a mission to arrest terrorists Zulkifli Bin Hir a.k.a. Marwan of Jemaah Islamiyah and Filipino bomb maker and Abu Sayyaf member Basit Usman. (MNS)