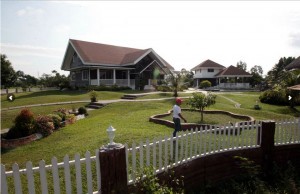 The controversial resthouse owned by PNP chief Dir. Gen. Alan Purisima in Barangay Magpapalayok, San Leonardo, Nueva Ecija was opened to the media on Monday, October 6. Purisima is facing plunder complaints before the Office of the Ombudsman over alleged ill-gotten wealth. He has denied the charges. (MNS photo)

The Batangas property, which was reported on Monday night by ABS-CBN’s TV Patrol, is the latest in a series of stories by the news outfit on allegations of ill-gotten wealth against Purisima, who was appointed PNP chief in December 2012.

Earlier reports were on his “mansion” in San Leonardo, Nueva Ecija and a bulletproof SUV.

The PNP chief has also been charged before the Office of the Ombudsman.

But PNP spokesman Chief Superintendent Wilben Mayor belied the report the agricultural land in Batangas is owned by Purisima.

“The Chief PNP denies these allegations and has no knowledge whatsoever about the acquisition or disposition of the said property,” Mayor told reporters in Camp Crame.

Mayor added that Purisima has ordered an investigation into how his name had linked to the property and identify the persons responsible.

Purisima’s own spokesman, Senior Superintendent Robert Po, said the PNP chief would answer the issues raised against him before the Ombudsman. (MNS)