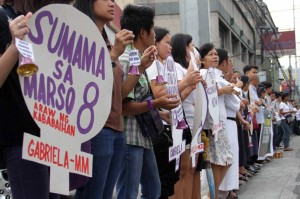 Members of women’s group Gabriela join religious and civil society organizations in forming a human chain along E. Rodriguez Avenue in Quezon City on Friday to commemorate the 40 days of the Mamasapano incident. The activity was one of several events calling for peace in Mindanao. (MNS photo)

MANILA (Mabuhay) — The families of the 44 Special Action Force (SAF) commandos killed in a clash with various armed groups in Mamasapano last January will continue receiving assistance from the government even after the change in the Philippine National Police’s leadership, PNP chief Director General Ricardo Marquez said Tuesday.

Marquez said aid continues to pour in for the police commandos’ family members since he assumed office last week.

In accordance with Aquino’s orders, Marquez said the PNP will continue to provide not just financial assistance to the fallen SAF troopers’ families, but also other forms of aid for their children, who might need help with their studies or search for jobs.

Despite the PNP’s focus on ensuring the continuity of assistance for the bereaved families, Marquez assured that the pursuit of justice for the slain SAF troopers is ongoing.

He said he is mindful of Espina’s reminder before his retirement that justice must be served for the fallen police commandos.