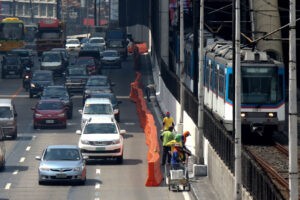 MMDA personnel work double time to repaint the exterior walls of the MRT near Boni Avenue Station on Sunday. The refurbishing is all part of the preparations for the Asia-Pacific Economic Cooperation Summit this week with 21 leaders of the member-economies and their delegations expected.(MNS photo)

MANILA, Nov 16 (Mabuhay) – The Philippine National Police (PNP) on Monday reiterated its advice to the public to stay at home and spare themselves from traffic woes caused by the road closures for the Asia-Pacific Economic Cooperation summit this week.

“We advise them to stay home and spare themselves the trouble of being caught in heavy traffic, or adding to the road congestion in the next four days,” Chief Superintendent Wilben Mayor, spokesperson of the PNP and 2015 APEC Security Task Force, said in a press statement.

He said the public advisory to avoid unnecessary road travel within the city is meant to decongest thoroughfares affected by road closures that will be implemented during the APEC week.

On Monday morning, commuters from Cavite endured a long walk along Coastal Road with the closure of Roxas Boulevard.

Some commuters even have to walk a stretch of about 10 kilometers to the Light Rail Transit’s EDSA-Taft Station while others opted to just return home.

Aside from Roxas Boulevard, roads leading to the Philippine International Convention Center, where the summit will be held, were also closed while authorities will stop traffic whenever the convoy of economic leaders are passing.

Mayor, meanwhile, clarified that the PNP has not received reports of any direct or specific threat to the APEC 2015 that formally opens Tuesday as he denied alleged terror threats supposedly attributed to him.

“I believe there is a deliberate effort at disinformation. Such messages must be disregarded and reported immediately to authorities,” he said.

He added the nationwide full alert condition is a matter of routine operational procedure in response to the incident in France, and further necessitated by ongoing security operations for the APEC Summit.

Col. Restituto Padilla, spokesperson of the Armed Forces of the Philippines, also urged those who will receive the text message to refrain from forwarding it to their friends.

Padilla said that intelligence gathering operations were intensified after the terror attacks in Paris, and they have yet to receive information of possible similar attacks in the Philippines. (MNS)

Abad should bite the bullet for DAP: Diokno

After ‘adjustment period,’ PNP to enforce regulations on Revilla visitors