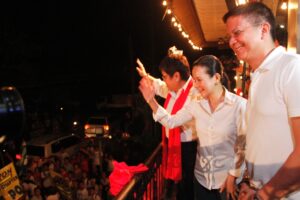 MANILA (Mabuhay) – The tandem of Senators Grace Poe and Francis Escudero will announce its senatorial ticket on Thursday, Escudero told reporters on Monday.

Escudero refused to give the names of those included in the slate but confirmed that aspirants Bayan Muna Representative Neri Colmenares, Atty. Lorna Kapunan, and Manila Vice Mayor Isko Moreno would be part of it.

Most of those included in the slate are expected to be present during the announcement, Escudero said.

He said Poe was directly involved in choosing their team’s senatorial line-up.

Escudero said Poe asked him to have preliminary discussions with at least three hopefuls but added that it was the presidential candidate who had final talks with them.

Aquino forced to act on ‘laglag-bala’