DALLAS (AP) – Now that the voters have chosen Troy Polamalu over Clay Matthews for The Associated Press 2010 NFL Defensive Player of the Year award, the two stars can prove their worth against each other on the field.

In the Super Bowl. 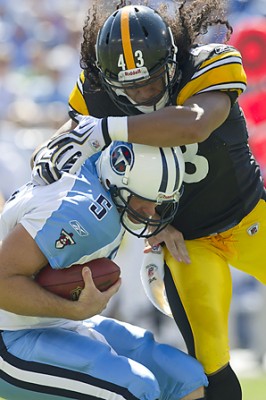 Despite missing two games, in which Pittsburgh went 1-1, Polamalu became the sixth Steeler to win the award. He had seven interceptions this season along with 63 tackles, but made his mark with big plays. In a late-season victory at Baltimore, his leaping tackle forced a fumble that set up the winning touchdown.

That victory catapulted the Steelers to the AFC North title. Now, they are in the Super Bowl for the third time in six seasons, where they face Matthews and the Packers.

“I don’t imagine their game plan changing over one player,” Polamalu said. “We don’t single out anybody. Anything we achieve here is done as a team, as a whole.”

Added Steelers linebacker James Harrison, who finished third in the balloting with eight votes and won the award two years ago: “Troy brings this defense from a ‘C’ defense to an ‘A’ defense. He’s someone that you have to account for in the secondary.”

So much so that one opponent called the eighth-year pro the NFL’s top player, regardless of position.

Polamalu has had better statistical years than 2010, including the 2008 championship season and in 2005, when he had a career-high 91 tackles and three sacks as the Steelers won the title. He hasn’t had any season where he made more big plays than in 2010.

That fit perfectly with defensive coordinator Dick LeBeau’s claim that Polamalu is the most versatile defensive back he’s ever worked with. And LeBeau has been involved with the NFL for about a half-century and is in the Hall of Fame.

“I know Troy is going to do the right things,” LeBeau said.

Matthews did plenty of things correctly in only his second pro season, enough to make the All-Pro team thanks to 60 tackles, 13 1/2 sacks (fourth in league), an interception return for a touchdown and, like Polamalu, a penchant for delivering decisive plays.

“Game-changing plays,” Steelers linebacker LaMarr Woodley said with emphasis. “I mean, you look at all the plays Troy’s made – game-changing plays. … So many game-changing plays to go out there and help win football games. Things that he (does), not only in the secondary – coming up, tackling backs in the backfield. Troy does it all.”

Matthews said it would have been a “unique honor” to win in his second year. His goal, he said, is to become “world champions.”

Added Matthews: “Despite defensive player of the year, I get the chance to play Sunday for the world championship.”

Considered the lesser of three linebackers drafted in the first round in 2009 from Southern California, Matthews has had the biggest impact of that trio. Yes, Brian Cushing was the league’s top defensive rookie in ’09, but he tailed off in 2010 while Matthews was surging.
Matthews’ sensational season came while facing consistent double-teaming.

“You really just attack it,” said Matthews, whose father and grandfather played in the league and whose uncle, Bruce, is a Hall of Fame offensive lineman. “I think last year, obviously, was about winning the one-on-one battles. Towards the playoffs, that’s when I saw the increase and it’s kind of continued. … So you deal with it, you try and beat one, then another, and get to the quarterback.”

Polamalu and Matthews take their competition to Dallas Cowboys Stadium on Sunday. They already are considered marketing adversaries, with Polamalu’s jersey the top seller in the league, and both vying for hirsute superiority.

“Well, I can guarantee you my hair’s more expensive,” Polamalu said.

Also receiving votes for AP Defensive Player of the Year were Chicago end Julius Peppers with six and linebacker Brian Urlacher with two; and Baltimore safety Ed Reed and nose tackle Haloti Ngata, one each.