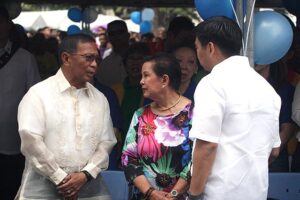 MANILA (Mabuhay) – Police have not found any connection linking the murder of former Makati engineer Nelson Morales, alleged bagman of Vice President Jejomar Binay, to his alleged involvement in some anomalies in Makati City.

At the resumption of the Senate Blue Ribbon sub-committee hearing on the corruption allegations against Vice President Jejomar Binay on Thursday, Chief Superintendent Jose Erwin Villacorte said there are six suspects in the killing of Morales in 2012, one of whom – a certain Roderick Saraan – is already behind bars and facing trial.

The police said politics is the only the motive police have identified so far with respect to Morales’ killing.

Morales, provincial chair of United Nationalist Alliance, was shot dead in Albay on September 7, 2012 after a wedding.

“Ang lumalabas sa investigation is political. At that time, 2012, he is planning to run for mayor,” Villacorte said.

Villacorte also clarified that the only connection between the killings of Morales and three members of Ongog family in Albay is that the same group was behind the murders.

“Based on the records, the only connection between the two cases lies on the fact that the suspects in the murder and multiple murder cases belong to one criminal group, itong Concepcion group,” he said.

Senator Koko Pimentel, chair of the sub-committee, summoned the police officials in order to give more information on the death of Morales, who was mentioned in the Senate many times for his alleged involvement in the rigging of bidding process of various Makati infrastructure projects as well as his role as one of Binay’s bagmen. (MNS)