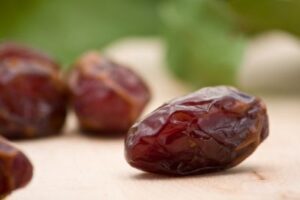 Dates, pictured here, could be a weapon in the war on heart disease if consumed in combination with pomegranate juice, according to recent research.
©Shawn Hempel/shutterstock.com

(Relaxnews) – A four-ounce glass of pomegranate juice with three dates could protect against the buildup of lipids on the arterial walls by as much as 33 percent, reducing chances for a heart attack, according to researchers in Israel.

Pomegranate juice and dates make a dynamic duo in the war on heart disease because their respective phenolic antioxidants work differently, according to lead author Professor Michael Aviram.

These scavenger antioxidants found in dates also stimulate the removal of cholesterol from arterial cells that come into contact with lipids, according to Professor Aviram.

Working with arterial cells in laboratory cultures, and with mice whose cholesterol levels were high, Professor Aviram’s team tested the combination of pomegranate juice and dates — using a cocktail that included their pits, which had been ground up.

The cocktail reduced oxidative stress in the arterial wall by 33 percent and decreased arterial cholesterol content by 28 percent, according to the study, which was published in the journal Food & Function.

Even without the pits, says Professor Aviram, the combination of dates and pomegranate is powerful and preferable to eating either fruit alone, but ideally the pits should be ground into a paste and consumed.

Pomegranate juice has long been hailed for its high antioxidant component and health benefits.

In 2010, a research team from the University of California at Riverside identified phenylpropanoids, hydrobenzoic acids, flavones and conjugated fatty acids as ingredients that keep cancer from spreading.

They do this by inhibiting the movement of the cancerous cells, weakening their attraction to a chemical signal that favors their attachment to the bone, bone marrow, lungs and lymph nodes, which usually results in death.

That study was presented in December 2010 at the annual meeting of the American Society for Cell Biology in Philadelphia, Pennsylvania in the US.

According to the Mayo Clinic, other foods that lower LDL cholesterol include high-fiber fare such as oatmeal, oat bran, kidney beans, apples, pears and barley.

Nuts such as almonds or walnuts contain polyunsaturated fatty acids that can lower bad cholesterol, while olive oil’s antioxidants can also help keep your blood vessels healthy if consumed in moderation.