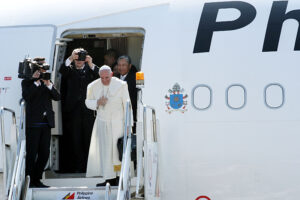 Visiting Pope Francis makes his farewell bow to the Filipino people before entering the Philippine Air Lines (PAL) plane that flew him back to Rome on Monday (Jan. 19, 2015) from Villamor Air Base in Pasay City. (MNS photo)

Manila, Philippines | AFP | Monday 1/19/2015 – Masses of cheering believers in the Philippines turned out to bid farewell to Pope Francis Monday,a fitting end to a week in Asia that saw him draw record crowds and campaign relentlessly for the poor.

The pontiff visited Sri Lanka as well as the Philippines on his second trip to Asia in five months, seeking to promote the Catholic Church in one of its most important growth regions.

More than one million people gathered along his motorcade route in the Philippine capital of Manila on Monday morning for a final glimpse of Francis, the city’s planning agency chief, Francis Tolentino, told AFP.

The 78-year-old pontiff showed no signs of fatigue from a gruelling week on the road, smiling and waving to the crowds from an open-air “popemobile” on the way to the airport.

President Benigno Aquino then led a red-carpet farewell on the tarmac, as children sang and danced, before the pope gave a final wave to the Philippines and boarded his plane to return home.

Sunday saw one of the highlights of his Asian journey, with six million people turning out in Manila as he celebrated mass—a world record for a papal gathering.

The Philippines is famed as the Catholic Church’s bastion in Asia, with 80 percent of the former Spanish colony’s 100 million people following the faith.

But even the pope was stunned at the size of the crowd, which surpassed the previous world record of five million set during a mass by John Paul II at the same venue in 1995.

“I cannot fathom the faith of the simple people,” Francis said, according to the archbishop of Manila, Cardinal Luis Antonio Tagle, who acted as the pontiff’s chaperone during his five days in the Philippines.

Throughout his stay in the Philippines—where a quarter of the population lives on 60 US cents a day or less—the pope spoke out against the forces that entrench poverty.

In a speech at the presidential palace, the leader of the Catholic Church lectured the nation’s elite, calling on political leaders to show integrity and do something to end the nation’s “scandalous social inequalities”.

He again implored people to do more to eradicate poverty, after an emotional encounter in Manila with a 12-year-old girl who asked why God would allow children to become prostitutes.

He said superficial compassion for the poor shown by many in the world, which amounts to just giving alms, was not enough.

“If Christ had that kind of compassion, he would have just walked by, greeted three people, given them something and moved on,” he said.

The pope said the main reason for visiting the Philippines was to meet survivors of Super Typhoon Haiyan, the strongest storm ever recorded on land which hit the country in November 2013, leaving more than 7,350 people dead or missing.

He flew on Saturday morning from Manila to Leyte island, ground zero for the typhoon, and celebrated a deeply emotional mass with 200,000 survivors.

“Some of you have lost part of your families. All I can do is keep silent. And I walk with you all with my silent heart,” he said.

Francis had planned to spend a full day in communities where homes were flattened by monster winds and tsunami-like ocean surges, but was forced to return at lunchtime to Manila to avoid another tropical storm.

Still, he was deeply moved by his shortened visit to the typhoon areas and felt privileged to have made the trip, Cardinal Tagle told reporters.

Shortly after the pope left, Tagle said the pontiff’s message during the trip was clear.

The pope began his Asian tour with two days in Sri Lanka, where he canonised the country’s first saint in front of another record crowd.

Police said a million people in the majority Buddhist nation turned out for the event, making it the biggest public celebration ever for the capital of Colombo.

Former traffic czar: I can solve traffic mess in a month