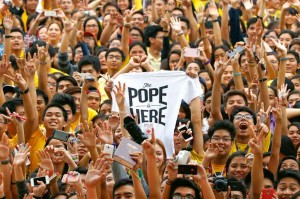 Youth participants cheer as Pope Francis arrives for a meeting with young people at the University of Santo Tomas, Sunday morning. Huge crowds converged in the oldest Catholic university in Asia for a chance to see the pontiff and listen to his message. (MNS photo)

ABOARD THE PAPAL FLIGHT (Mabuhay) – At the end of his five-day apostolic voyage to the Philippines, Pope Francis described Filipinos as having joy that is genuine, enthusiasm that is not fake, actions that are from the heart – despite all their suffering.

“A people that knows how to suffer, and a people capable of rising up,” said the Pope, speaking to journalists on Philippine Airlines flight 8010 from Manila to Rome.

Francis said the most moving moment of his trip came during the Tacloban airport mass, where hundreds of thousands affirmed their faith even after the tragedy that was Yolanda.

The Pope reiterated his sadness at having to cut short his trip to Leyte – forcing the cancellation of some events in Palo – on account of tropical cyclone Amang.

“Memorable,” on the other hand, was a word he used to describe scenes of parents with their children to papal events – fathers lifting their children and raising them to be blessed by the pope; mothers bringing their sick or disabled kids for the holy father’s benediction.

He said these were “actions from the heart” that showed how much these parents treasured their children.

Pope Francis on the other hand marveled at the Filipinos’ capacity to hear mass or celebrate a feast even during a heavy downpour.

Heavy rain and gusty winds forced organizers to modify the mass at Tacloban airport but all throughout, the Pope observed, the people never lost their smiles.

In Luneta where the Pope celebrated mass on Sunday, coinciding with the Feast of the Santo Nino, it rained for hours, but the millions who attended did not budge.

During the mass and the two motorcade sessions in Luneta, the Pope said he was among the “people of God” and that he was their servant.(MNS)