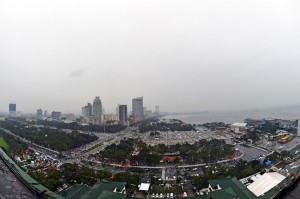 This general view shows millions of faithful attending a Mass held by Pope Francis at Rizal Park, Manila Sunday. Pope Francis celebrated Mass with millions of singing and cheering Catholics in the Philippine capital in one of the world’s biggest outpourings of papal devotion. (MNS photo)

MANILA, Jan 19 (Mabuhay) – As he led the send-off for Pope Francis on Monday, President Benigno Aquino III said the pontiff told him he was “very, very happy” with the warmth and love he received throughout his five-day visit.

Asked if he had personal intentions during his encounters with the Pope, Aquino said: “Inuna ko muna siyempre ‘yung sa bayan.”

Pressed when he thinks the Pope will be back in the country, Aquino replied: “Tingnan natin kung kailan babalik.”

As head of both the Vatican state and the Roman Catholic Church, the Pope was sent off by a delegation composed of government and Filipino church leaders, among them members of the organizing committee for his visit.

For Malacañang, the papal visit was “successful” and “meaningful.”

In a statement on Monday, presidential spokesman Secretary Edwin Lacierda attributed the success of the papal visit to the discipline shown by Filipinos over the past days.

“Without doubt, on this occasion, the Filipino people once more showed what could be achieved when we work towards a unified endeavor,” the Palace official added.

At a press conference right after the Pope left, Manila Archbishop Luis Antonio Cardinal Tagle said the success of the five-day papal visit is “a miracle in itself.”

“[It was] an act of communion, an act of solidarity, and it is a miracle in itself,” he said. “Thanks to God and thanks to everyone, we were able to show to the world that it is possible, [that] communication, cooperation, and collaboration are not just ideas.”

For his part, Archbishop Guiseppe Pinto, apostolic nuncio to the Philippines, said, “Thank you, in the name of Pope Francis,” a report from dzBB radio said.

Tagle also confirmed that the Pope has been invited to the 51st International Eucharistic Congress in Cebu in 2016.

The Pope’s visit marked a number of firsts for him, and in turn some historical marks for the Philippines, the country with the third most number of Catholics in the world.

Church officials said it was the first time that the Pope wore a raincoat during a Mass.

Also, Vatican spokesperson Father Federico Lombardi said his open-air Mass at Quirino Grandstand despite the rains may be “the largest event in the history of popes,” with six to seven million attendees according to the Office of the President.

“We are not able to count all these people, obviously, or to verify this, but in any case, we have seen so many people that we believe that it is possible,” he said. “If this is true, and we think it is, this is the largest event in the history of the popes.”

Prior to this, the Guinness World Records said the largest crowd at a papal event was for Saint John Paul II’s Mass at the same venue in 1995 for the World Youth Day.

The Pope arrived at the Villamor Air Base at 9:30 a.m. Monday, following a motorcade that saw him bless Filipinos who lined the route from the Apostolic Nunciature to the airbase.

After a quick stop at the Kalayaan Lounge, the Pope, together with Aquino, walked to the tarmac of the airbase, where the Philippine Airlines Airbus 340, locally dubbed Shepherd One, that will fly him back to Rome was waiting.

More than 700 former street children under the care of the Department of Social Welfare and Development were present there, as well as a drum-and-lyre band, who were among the well-wishers that sent the Pope off to his 13-hour non-stop flight.

The Pope then met the delegation from the government and the church lined up on his way to the plane. Among them were some of Aquino’s Cabinet secretaries, as well as Vice President Jejomar Binay.

On the church’s side, the send-off queue included members of the papal visit organizing committee, such as Pasig Bishop Mylo Vergara, Balanga Bishop Ruperto Santos, and Fr. Rufino Sescon.

Aquino and Tagle walked the Pope to the plane, with Apostolic Nuncio Guiseppe Pinto and Archbishop Socrates Villegas behind them.

The Pope boarded the plane at 9:49 a.m. as Filipino well-wishers sang the local church anthems “Tell the World of His Love,” “We Are All God’s Children,” and Only Selfless Love.”

He was seen waving even from inside the plane, which took off at 10:12 a.m., a few minutes later than the scheduled 10 a.m. departure.

As he walked out to the tarmac, the Pope was seen carrying his own bag, a black leather satchel, as per his custom.

Another custom, as with his predecessors, is that the Pope is flying back to Rome in the country’s flag carrier.

The practice is for the Pope to fly to his country of destination via a plane chartered by the Vatican – in general, the Italian carrier Alitalia. He is then flown back to Rome via the national airline of whatever country he is visiting.

According to Vatican reporter John Allen, the Vatican does not have a version of Air Force One, and it may also be wrong to call the plane that the Pope flies in “Shepherd One” since they “are normal commercial jets that were in use the day before flying one of the carrier’s regular routes, and will be back in service the day after.”

Many have remarked that the Pope’s visit exemplified his preaching of simplicity and humility as the people’s pastor.

Prior to his arrival, the Vatican has requested that arrangements be simple while making sure that the Pope would be safe.

His preference for an open Popemobile was also followed, with three units provided, including one borrowed from his trip in South Korea.

Some of the welcome tarpaulins bearing his face were also taken down upon his request.

In his events, the Pope was seen mostly in his simple white cassock. With parts of his visit under a rainy atmosphere, the Pope was one with the people in wearing a poncho, particularly during his visit in Tacloban City and Palo town in Leyte. (MNS)

Marcos thanks Pinoys in Singapore for support in polls