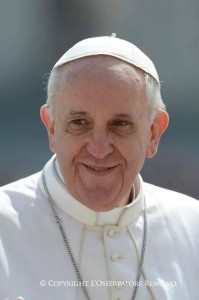 MANILA (Mabuhay) – January 2015 will be a significant month for the Philippines, as it will get a visit from no less than Pope Francis.

The Pope said he plans to visit the Philippines and Sri Lanka in January, Catholic News Service reported Tuesday.

While no other details were immediately available, the CNS said the Pope “announced he plans to visit the Philippines and Sri Lanka in January.”

Last May 19, Manila Archbishop Luis Antonio Cardinal Tagle told CNS in a separate interview that plans are underway for Pope Francis’ visit to the Philippines and Sri Lanka.

“The Vatican has not yet announced the dates and the specific itinerary that the pope will observe, but I am confident it will happen early next year,” he was quoted in the interview as saying.

In the same interview, Tagle said one purpose of the papal visit could be “to come close to the people who suffered from the recent typhoon (in November) and the earthquake (in October).”

“We will see how that could be done. But he, I think, would want that to be a defining character of his trip,” he said.

On the other hand, Catholic Bishops’ Conference of the Philippines president and Lingayen-Dagupan Archbishop Socrates Villegas said there is no problem with making preparations on short notice if the visit pushes through.

“The pope is welcome anytime. The time to prepare is not an obstacle,” Villegas said in an article posted on the CBCP news site .

The same article said that should the visit pushes through, Pope Francis will be the third pope to visit the Philippines, after Pope Paul VI (1970) and now St. John Paul II (1981 and 1995).

Villegas said many Filipinos will pitch in for the preparations because “Filipinos love the pope.”

On the other hand, he said security would not be an issue. “There is no problem without any solution,” he said.

The CBCP said Pope Francis will travel to South Korea from August 14 to 18 this year for the Asian Youth Day (AYD).

Also, the CBCP said it invited the pope to attend the International Eucharistic Congress set in Cebu in January 2016. (MNS)