At the press conference, Philippine Trade Representative to Los Angeles Jose Ma. S. Dinsay made a power-point presentation on promoting Philippine Specialty Food in the United States. With an official food brand of Food Philippines the DTI, through its international trade offices and CITEM, aims to promote Philippine food products that are natural, organic and strong in Filipino heritage.  Ms. Mediran of CITEM said that their trip to California marks the return of Philippine food exports in Food Expositions and Markets this time offering premium, high quality products geared towards mainstream market with discerning customer base.

The members of the Food Mission had a day of successful Business Matching with US based companies at the Crowne Plaza Hotel on 24 January 2014.  This event provided opportunities for the Philippine companies and resulted in establishing new contacts and agreements in marketing their products for distribution and sale in the U.S. 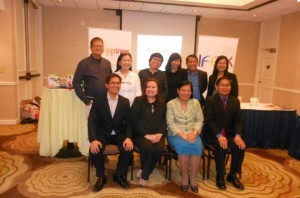