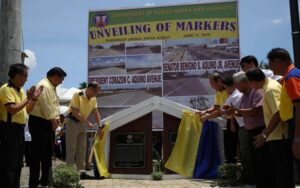 ILOILO CITY, June 12 (Mabuhay) — President Benigno S. Aquino III on Friday underscored the importance of solidarity as he led the celebration of the country’s 117th Independence Day in the town of Santa Barbara in Iloilo province.

The President said that because of the united effort of our forefathers, the Philippines gained freedom after 300 years under Spanish rule.

The Chief Executive also said unity gives power to the people to fight corruption and poverty.

President Aquino also reminded the people of the importance of following the “straight path.”

The Independence Day program began at 8 a.m. with a flag-raising ceremony, followed by a wreath-laying ceremony at the General Martin Delgado Monument at the Municipal Plaza, where the provincial government of Visayas was inaugurated on November 17, 1898.

After the wreath-laying ceremony, the President visited the historic Santa Barbara Church.

The church visit ended the program in Santa Barbara, as the President headed for the city center for the Vin D’Honneur ceremony, held at the newly renovated Provincial Capitol along Bonifacio Drive.

In his message during the Vin d’Honneur, President Aquino thanked the international community for their assistance especially during disasters.

“My country has indeed achieved so much, yet we did not do this all on our own. We reached our goals sooner because of the international community, who recognized our earnest efforts and saw an honest government and a people truly worth helping. This, in turn, breeds in us a debt of gratitude—what we call utang na loob—shown in our determination to do our share to address the world’s problems,” said the President. (MNS)