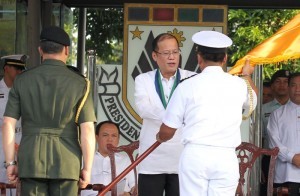 President Benigno S. Aquino III passes on to newly installed Presidential Security Group (PSG) Commander Navy Captain Raul Ubando the Command Symbol after it was ceded by former PSG Chief B/Gen. Ramon Mateo Dizon during the PSGChange of Command Ceremony and Testimonial Review with Retirement Ceremony at the PSG Grandstand, Malacañang Park in Manila City on Friday (August 30). Ubando is a member of the Philippine Military Academy (PMA) “Sandiwa” Class of 1985. PSG is the lead agency tasked in providing security to the President of the Philippines and the First Family. They also provide protective security to visiting Heads of States and diplomats. (MNS photo).

MANILA, Sept 6 (Mabuhay) — President Benigno S. Aquino III has enjoined all departments, agencies, and Instrumentalities of the national government and local government units (LGUs) to actively support the full implementation of the Task Force Pablo Rehabilitation Plans and Programs to restore to normalcy the living conditions of the affected communities of typhoon Pablo.

The directive was issued by virtue of Memorandum Circular No. 53 signed by Executive Secretary Paquito N. Ochoa Jr. on August 30.

Typhoon Pablo was considered as the strongest typhoon to ever hit Mindanao in two decades.

Typhoon Pablo which made a landfall in December 2012 caused numerous casualties and severe damage to property, infrastructure, and agriculture in Visayas and Mindanao, especially in the worst-hit provinces of Compostela Valley and Davao Oriental.

In response to the widespread destruction caused by typhoon Pablo, the national government has been providing assistance to its victims to restore to normalcy the living conditions of the affected communities at the earliest possible time.

Pursuant to the directive of the President, Task Force Pablo was created to develop the comprehensive Pablo Rehabilitation Plan (PRP) which aims to rationalize, harmonize, streamline, simplify, integrate, and unify the efforts of government agencies mandated to rehabilitate the affected areas and address the needs of the affected population.

He enjoined all officials and employees of government agencies and instrumentalities, including Government-Owned or -Controlled Corporations ‘ and LGUs, to fully support and cooperate with the Task Force in the full implementation of the comprehensive plans for the Typhoon Pablo affected areas.

The Office of the Cabinet Secretary was designated as Chair of the Task Force to ensure proper implementation, management, monitoring, evaluation and integration of the social services, infrastructure, resettlement, and livelihood rehabilitation plans, policies, and programs.

The President directed Task Force Pablo to work with all concerned stakeholders, including the LGUs with jurisdiction over Compostela Valley and Davao Oriental, in the full implementation of the Pablo Rehabilitation Plan, and to regularly submit reports to the Office of the President.

“Subject to the approval of the President, and as reviewed and recommended by Task Force Pablo and the Department of Budget and Management (DBM) in accordance with the relevant guidelines of the National Disaster Risk Reduction and Management Council whenever applicable, the member-agencies of the Task Force and the Clusters are hereby authorized to charge against their current appropriations such amounts as may be necessary for the implementation of this Order,” the Memorandum Circular read. Budgetary requirements of the Task Force shall be subject to the usual government accounting and auditing rules and regulations.

Additional funds as may be necessary for the implementation of this Order shall be identified and released by the DBM, in accordance with the approved Pablo Rehabilitation Plan.

No automatic relief under TPS