President Benigno S. Aquino III salutes as he acknowledge the men and women in uniform participating in the pass-in review during the 77thFounding Anniversary of the Armed Forces of the Philippines (AFP) at the AFP General Headquarters Grandstand in Camp General Emilio Aguinaldo, Quezon City on Friday (December 21, 2012). This year’s theme is: “Bayanihan at Kahandaan: Tuwid na Daan Tungo sa Kapayapaan”. The pass-in-review is AFP’s show of force consisting of six battalions in gala uniforms and six battalions in battle dress uniform. The foot troops are followed by the Flyby consisting of 31 aircraft from the Philippine Air Force (PAF), Philippine Navy (PN) and 2 reservist aircraft. In photo are Defense Secretary Voltaire Gazmin and former President Fidel Ramos.(MNS photo)

MANILA, Dec 21 (Mabuhay) — President Benigno S. Aquino III led the awarding ceremonies honoring 12 soldiers and civilian employees for their outstanding achievements and heroic acts in the service in celebration of the 77th Armed Forces of the Philippines (AFP) Anniversary at the AFP Grandstand, Camp Aguinaldo, in Quezon City on Friday.

Anchored on the theme: “Bayanihan at Kahandaan: Tuwid na Daan Tungo sa Kapayapaan,” this year’s AFP Anniversary celebration was highlighted by the awarding of 12 deserving AFP personnel who contributed to the advancement and promotion of the organization.

Upon his arrival, President Aquino was given full military honors.

Another highight of the celebration was the presentation of the book entitled, “Kwentong Bayanihan,” a collection of short stories written by members of the military and civilian sectors to illustrate the finest practices of Bayanihan to the President and the AFP Commander-in-Chief Aquino.

The AFP also presented to the Chief Executive a DVD copy of 20 short films under “Kwentong Bayan,” produced and directed by Filipino Pictures, Inc. It is envisioned to effectively show a different perspective on addressing the root causes of insurgency and social issues in the country.

The event was also highlighted by the Inspection of troops, pass-in-review and the motorized contigent featuring some of the AFP’s newly-acquired and refurbished equipment.

The motorized contingent was composed of the Special Operations Command mounted on three KM450 vehicles, the 710th Special Operations Wing on one Humvee Combat Vehicle, two KM450 trucks and one Explosive, Ordnance and Disposal Van. 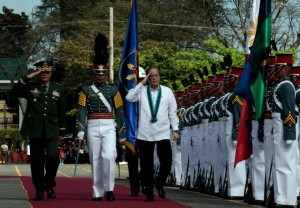