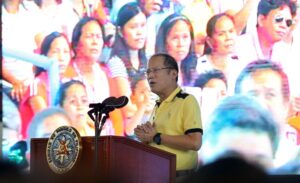 President Benigno S. Aquino III delivers his speech during the briefing on the major infrastructure projects in the Province of Misamis Occidental held at the Sinanduloy Cultural Centre in Tangub City on Wednesday (September 09). (MNS photo)

MANILA (Mabuhay) –President Benigno S. Aquino III on September 18 signed into law the establishment of a sports academy in the municipality of Dapa in Surigao del Norte province.

Under Republic Act No. 10683, the Siargao Island Sports Academy and Training Center will be constituted as the primary sports development and training center for Surigao del Norte and its neighboring provinces.

The province, in coordination with the Philippine Sports Commission (PSC), was tasked to “take the necessary steps to upgrade, improve and modernize existing facilities, equipment and personnel, and integrate them into the newly created sports academy and training center”.

It was also tasked to “create the necessary training programs and competitions, as well as the system by which the facilities shall be maintained and managed in order to accomplish the objectives and purposes of this Act”.

The construction, establishment and operation of the sports academy will use funds from the provincial government, as well as those that may be granted by the PSC and the Office of the President.

“In addition, grants and endowments may be obtained from local or foreign sources intended for sports development,” RA 10683 stated.

The Secretary of Education will immediately include in the department’s programs the operation of the Siargao Island Sports Academy and Training Center, the funding of which will be included in the annual General Appropriations Act.

The PSC, in coordination with the Department of Education, Surigao del Norte’s provincial government, and Dapa’s municipality, was given 90 days to promulgate the necessary rules and regulations for the implementation of the Act after its enactment into law. (MNS)