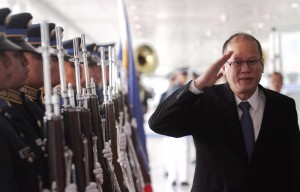 MANILA (Mabuhay) — President Benigno S. Aquino III is scheduled to attend the 24th ASEAN Summit, to be held in Nay Pyi Taw, Myanmar on May 10 to 11.

Department of Foreign Affairs Spokesperson Charles Jose said during a press conference on Wednesday that the President will have a tight schedule in Myanmar.

Upon his arrival on Saturday, the President is slated to attend the welcome dinner to be hosted by Myanmar President U Thein Sein for all ASEAN leaders and their delegations.

During the ASEAN Summit Plenary, the leaders will discuss and exchange views on the progress of the implementation of the Roadmap for an ASEAN Community, the initiative for ASEAN Integration Work Plan II and the Master Plan on ASEAN Connectivity, said Jose.

They will also discuss and exchange views on the future of the ASEAN community, as well as external relations and future directions, he added.

At the 24th ASEAN Summit Retreat, the leaders are expected to exchange views on current regional and international issues.

Jose said the crafting of the Code of Conduct (COC) and the situation in the South China Sea or the West Philippine Sea are expected to be discussed in the summit. He noted that the President will most likely ask his fellow ASEAN leaders to work for the early conclusion of the COC.

“There have been three meetings thus far since September 2013; and we take note of the discussions of the working groups on the crafting of the COC. I am sure the President will be bringing up this agenda item,” he said.

“I would imagine the President will be informing his fellow ASEAN leaders on the submission by the Philippines of our Memorial last March 30 on the progress of our case. And I would also imagine that there would be discussions on the general situation in the South China Sea,” he added.

Myanmar, as ASEAN Chair, will brief the leaders on its preparations relative to ASEAN’s participation in the G-20 Summit to be held in November 2014.

“Moving Forward in Unity to a Peaceful and Prosperous Community” is the theme for this year’s ASEAN, highlighting the importance of a united ASEAN. (MNS)