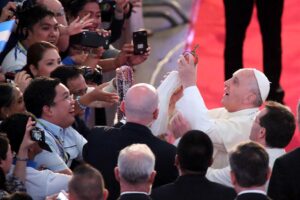 Pope Francis puts a crown on an image of the Virgin Mary presented to him by someone from the crowd during the Encounter with Families at the MOA Arena on Friday. A chosen crowd of about 20,000 watched and listened as the Pope reflected on the family’s importance. (MNS photo)

The Marian image is carved from a piece of wood from a century-old acacia tree that once stood on the grounds of Malacanan Palace, but was felled by typhoon ‘Glenda’ in July 2014.

“In all this: in this sculpture, in Mary, Undoer of Knots, in His Holiness’ life, and in the story of the Filipino people, we see the beauty of faith and the strength of devotion, amidst the suffering and challenges of life,” the Palace said.

Paete, Laguna native Fred Baldemor, a renowned and multi-awarded sculptor in wood, bronze and marble, hand-carved the image of Our Lady over several months.

Pope Francis’ special devotion to Mary has become known to many across the world.

The most famous representation of this is the painting that inspired his devotion while studying in Germany, and provided him solace in prayer.

Other gifts Pope Francis received from President Aquino include commemorative coins in Php50 and Php500 denominations bearing the Pope’s face.

The pontiff is in the second day of a five-day pastoral and state visit to the Philippines. (MNS)