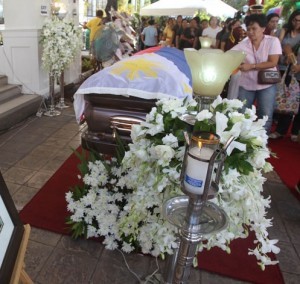 Relatives, supporters and friends continue to flock to the Archbishopâ€™s Palace in Naga City to pay their last respects to the late Interior and Local Government Secretary Jesse Robredo during the public viewing on Thursday (August 23). MalacaÃ±ang is preparing for a state funeral for the former DILG Chief. His remains will lie in state in MalacaÃ±an Palace on Friday (August 24) until Sunday morning (August 26). President Benigno S. Aquino III has signed Proclamation No. 460, declaring National Days of Mourning starting August 21 to mark the death of the former DILG Chief until his interment. The national flag will be flown at half-mast from sunrise to sunset in all government buildings in the Philippines and in the countryâ€™s posts abroad for a period of six days. (MNS photo)

He said MalacaÃ±ang should purchase 4 new planes that can be used by the President and other leaders of government, including Cabinet secretaries.

He said the present fleet consists of old, dilapidated aircraft and helicopters. Most are even older than the President, he said.

Suarez expressed his concern for the safety of the President and his official family amid the death of Interior and Local Government Secretary Jesse Robredo.

He pointed out that many times the President and his official family simply borrows an aircraft from businessmen friends if they need to travel.

In this kind of situation, the safety of the countryâ€™s leaders is compromised because the borrowed aircraft may not have been fully checked and secured by government security.

He proposed a budget of $65 million that the Department of National Defense can allot to buy four new planes for the President and his official family. (MNS)

Palace to VP Binay camp: Bring it on