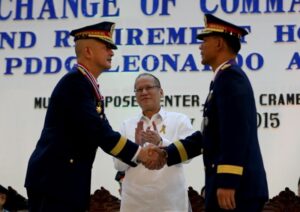 MANILA (Mabuhay) — Philippine National Police (PNP) chief Director General Ricardo Marquez on Tuesday assured the public that investigation on the alleged anomalies surrounding the so-called “White House” in Camp Crame will continue even if it has now become his official residence.

Marquez said the Ombudsman has meted out administrative sanctions in connection with the donations gathered for the White House’s construction in 2013.

At the time, the occupant of the two-story residence was then-PNP Chief Director General Alan Purisima. In late June, the Ombudsman ordered the dismissal of Purisima and 10 other police officials over another controversy – entering into an allegedly anomalous contract with service courier Werfast Documentary Agency (Werfast) in 2011.

Asked if the investigation on the White House’s controversy will continue, Marquez replied in the affirmative.

The White House landed in the headlines last year after reports surfaced that its construction cost reportedly reached around P20 million.

PNP director for comptrollership Chief Supt. Rolando Purugganan, however, clarified that the construction only cost P11.463 million, which he said all came from donors.

Late last week, the PNP allowed members of the media to visit the compound of the controversial residence of the PNP chief. The residence itself, however, was not opened to the media for security reasons.

Despite the Office of the Ombudsman’s ongoing investigation into the alleged anomalies surrounding the White House, Marquez confirmed he will be living there with his family.

Marquez, who formally assumed office last July 16, is expected to serve as PNP chief until he reaches the mandatory retirement age of 56 on Aug. 28, 2016.(MNS)