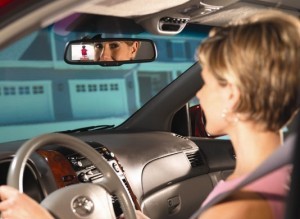 The rearview mirror is an effective and intuitive location for backup video displays that help drivers detect and avoid potential hazards in the vehicleâ€™s rearward path.

BACKING up a motor vehicle is inherently difficult and potentially dangerous. Thatâ€™s why Congress recently passed the Kids Transportation Safety Act. It requires that automakers install backup cameras and related video displays in all new vehicles in the U.S. by September 2014. Such systems help prevent pedestrian injuries and deaths from accidents that happen when a vehicle is reversed. Young children are especially vulnerable to such accidents as they are often too short to be seen. As it stands today, the regulation requires the rear camera display to turn on in two seconds or less from the time the vehicle is put in the reverse gear, and the brightness of the display must be at least 500 cd/m2. However, not all rear camera displays are equal, say the experts. When it comes to choosing a rear camera display, go for:

â€¢ Mirror integrated. The mirror appears to be a safer location for the display, likely because it is in the driverâ€™s natural line of sight, can be viewed while maintaining a heads-up posture and is in a logical, intuitive and ergonomic location that the driver is already accustomed to viewing regularly â€“ especially when backing up. Recent independent studies reveal that displays in the rearview mirror are more effective in helping drivers to detect obstacles and avoid backover accidents when compared with drivers using in-dash displays. Having the display in the mirror also prevents sunlight from washing out the display, which may be a problem with dash-mounted designs.

â€¢ Faster. Mirror-integrated rear camera displays tend to turn on faster than those sharing a display with the navigation or infotainment system, as those systems can require significant time to boot up. Gentex Corporation (NASDAQ: GNTX), the leading supplier of automatic-dimming mirrors with integrated electronic features, provides automakers with rear camera displays that respond in two seconds or less.

â€¢ Brighter. Gentex display mirrors are bright, too–300 to 500 percent brighter than in-dash displays. The mirror display consists of a bright, high-resolution display that works with a video camera to provide a view directly behind the vehicle when backing up.

â€¢ Cost effective. Mirror-integrated displays also tend to be less expensive than those mounted in the dash or center console. The mirrorâ€™s â€œplug and playâ€ design allows automakers to avoid the significant expense of tooling each vehicleâ€™s dash to accommodate a display. In addition, they allow consumers to purchase the feature without having to also pay for expensive navigation or infotainment systems.

AFP not inclined to send troops to Golan Heights