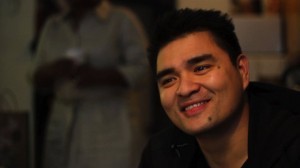 LOS ANGELES (AFP) – Pulitzer-prize winning journalist and activist Jose Antonio Vargas, who revealed in 2011 that he is an undocumented immigrant, was freed by US border agents after being held for several hours Tuesday.

Campaigners and leaders including the mayor of New York had called for the Philippine-born 33-year-old’s release from detention in a Texas border town, some urging President Barack Obama to intervene in an incident that threatened to inflame an already fiery immigration debate.

Vargas has been in the southern US state to highlight the plight of tens of thousands of children from Central America who have flooded across the border and into the United States in the past year in search of a better life, his campaign group Define American said.

A high-profile campaigner for the rights of fellow immigrants, he was detained at the airport in McAllen, where he planned to board a flight to Los Angeles, before being freed later in the day, authorities and Define American said.

“As an unaccompanied child migrant myself, I came to McAllen, Texas, to shed a light on children who parts of America and many in the news media are actively turning their backs on,” Vargas said in a statement on the Facebook page of Define American, which he founded.

“But what I saw was the generosity of the American people, documented and undocumented, in the Rio Grande Valley.

“I’ve been released by Border Patrol. I want to thank everyone who stands by me, and the undocumented immigrants of south Texas and across the country. Our daily lives are filled with fear in simple acts such as getting on an airplane to go home to our family.”

Vargas was detained “after he stated that he was in the country illegally,” he said, adding that he “was processed and provided with a Notice to Appear before an immigration judge.

“He was released on his own recognizance after consultation with Immigration and Customs Enforcement (ICE),” he added, giving no further details of when Vargas was due before a judge.

The Huffington Post posted a video of Vargas being questioned at McAllen airport. “Do you have a visa?” a border agent asks, to which Vargas replies: “No, there’s no visa.”

Vargas, who was part of a Washington Post team that won a Pulitzer Prize in 2008, revealed in a 2011 New York Times magazine essay that he was undocumented.

He was 12 years old in 1993 when his young mother put him on a flight in Manila to be raised by his grandparents in California, in the hope he could live the American dream.

What happened since that Times essay is the subject of “Documented,” written, produced and directed by Vargas, which got its world premiere last June.

US authorities are currently dealing with a surge of unaccompanied and undocumented children coming over the country’s southern borders with Mexico.

Over 57,000 have illegally entered the United States since October, the majority arriving in Texas, according to official US data. They are mostly from Central America, fleeing poverty and violence.

Prior to his release, Define American said that, as well as winning a Pulitzer, Vargas has created dozens of jobs through his activist work and “exemplifies what it means to define American.”

New York Mayor Bill de Blasio was among those who had called for Vargas to be released.

“I stand in solidarity with journalist and advocate Jose Antonio Vargas – an exemplary man whose tireless work has helped raise awareness around the lives of millions of undocumented immigrants living on American soil,” he said.

“Jose Antonio’s detainment today… shows how our immigrant enforcement agencies are failing to use their discretion and detaining long-time immigrants who do not pose a threat to our security.”