Purisima can be charged with usurpation of authority 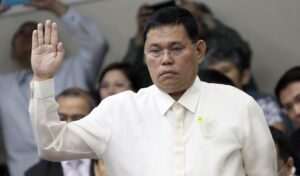 Former Philippine National Police (PNP) Director General Alan Purisima takes his oath at the Senate hearing on the Mamasapano incident that happened last January. The inquiry will collate relevant pieces of information with regard to the killing of the 44 members of the Special Action Force, determine accountability and provide a framework of reforms. (MNS photo)

Special Action Force chief Getulio Napenas earlier said he pushed through with the mission to hunt down Malaysian bomb-maker Zulkifli bin hir, alias Marwan, last month based on the prior clearance of Purisima in November 2014.

Last January 9, 2015, Napenas said he, Purisima and other officials met with President Aquino for a mission update on the Marwan operation.

He said the President told officials that he wanted the operation coordinated with the Armed Forces.

However, Purisima, who was suspended at the time, told Napenas not to tell PNP Officer-in-Charge Leonardo Espina and Interior and Local Government Secretary Mar Roxas about the operation beforehand.

Purisima also told Napenas that he will be the one to inform Armed Forces chief of staff Gregorio Catapang.

The mission was carried out last January 25, with 44 police commandos killed.

Lawmakers have criticized Purisima for advising Napenas to break the chain of command.