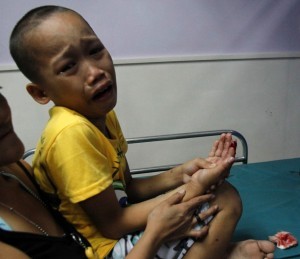 Christian Jay Comedor, 10 years old, of Baesa in Quezon City, was rushed by her mother, Julie, on New Year’s Eve (December 31, 2013) at the Quezon City General Hospital for injuries caused by the infamous piccolo firecracker. It is a belief in the mostly Catholic nation that making noise to welcome the New Year drives evil spirits away and ushers in good luck. (MNS photo)

MANILA (Mabuhay) – A 12-year-old boy who was rendered brain-dead after suffering a head injury from a firecracker explosion has died, but will “live on” after his family decided to donate his organs, the Department of Health said Monday.

“12-year-old boy dies but ‘lives’ as [his] family donates his kidneys; [DOH Secretary Enrique] Ona condoles with and praises [his] family for this act of heroism and kindness,” Tayag said on his Twitter account.

Tayag also said this year’s revelry-related injuries has passed the 1,000 mark “because many revelers used the illegal, imported piccolo.”

As of 6 a.m. of Jan. 5, he said there were at least 1,018 revelry-related injuries, including 997 from setting off or handling consumer fireworks, two from ingesting fireworks, and 19 from stray bullets.

Of the 997 fireworks-related injuries, he said 376 or 38 percent were from the piccolo.

In the same period in 2012, he said, there were 931 revelry-related injuries, including 904 from fireworks, two from fireworks ingestion and 25 from stray bullets. (MNS)

‘I want to talk to my lawyer’