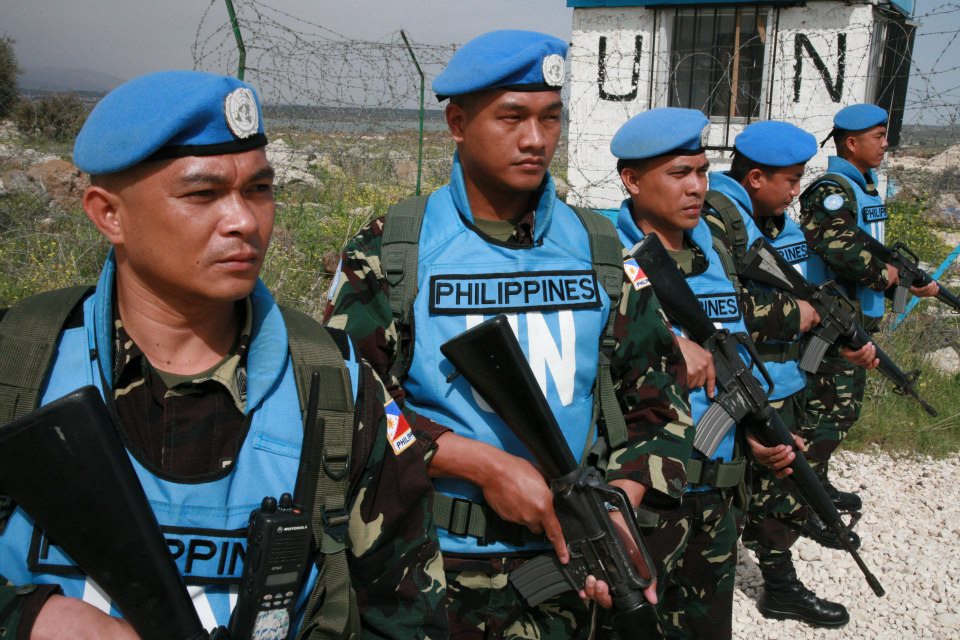 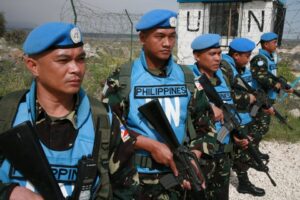 More than 40 peacekeepers from Fiji were forced to surrender their weapons and were taken hostage in Golan Heights, but 81 Filipino blue helmets (shown above) “held their ground” and refused to disarm, reports from Manila said. Photo: Elmer G. Cato, DFA Consul/Golan Heights.

MANILA (Mabuhay) – Despite falling under the “no risk” category in Ebola-affected Liberia, the Philippine contingent that will be coming home this week will be kept in a 21-day quarantine period at an island off Naic in Cavite, the Armed Forces of the Philippines (AFP) said.

The 18th Philippine Contingent to Liberal will be arriving at the Villamor Air Base in Pasay City on Wednesday at around 5:45 p.m., AFP chief Gen. Gregorio Pio Catapang announced in a press conference on Monday.

The contingent is made up of 108 members of the Air Force, together with 24 members of the Philippine National Police, and a member of the Bureau of Jail Management and Penology (BJMP).

“Our peacekeepers belong to the ‘No Risk’ category of Ebola infection,” Catapang said, adding that they “all passed the Ebola Screening Test” conducted by the UN Mission in Liberia (UNMIL) last November 8.

As per protocol, however, the contingent will still be brought to Caballo Island near Corregidor for a 21-day quarantine period.

According to AFP spokesman Brigadier General Domingo Tutaan, the quarantine is only part of the protocol.

“Precaution lang ito,” Tutaan said, adding that they wish to protect the peacekeepers from being labeled and feared because of this.

“We want to [protect them] in the sense that they will not be labeled by the public on this. [The quarantine is] really just to make sure that the protocols are undertaken. It’s an assurance to everybody,” he added.

For their part, the Air Force is also focused on easing the worries of the peacekeepers’ families, since the quarantine extends the time they will be kept apart from their loved ones.

“Our concern sa Air Force ngayon is more of morale and welfare of families, said Air Force spokesman Lt. Col. Enrico Canaya. “We want to make sure na ‘yung families din ay aware of what’s happening. We are going to brief them [upon the peacekeepers’ arrival].”

No heroes’ welcome has been scheduled for the peacekeepers’ arrival on Wednesday, when their families would only be allowed to see them from behind a cordon to be set up some 15 meters away.

The families, however, will be able to keep in touch with the peacekeepers as the telecommunication service providers have set up additional facilities in the island to support stronger signal and free WiFi connection.

“From time to time we will also ask the families what they want to bring to their loved ones and we will allow them to send those via the AFP,” Canaya added.

According to Tutaan, ceremonies to honor the peacekeepers will be held after the 21-day quarantine period. (MNS)