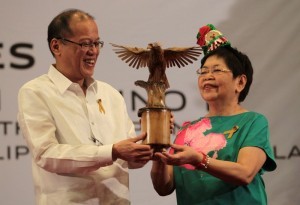 Quimbo said the measure will actually lead to increased consumer spending and generate vast economic activity, which will translate to higher tax collections.

The bill, which raises the tax exemption cap for bonuses from the current P30,000 to P82,000, is just awaiting President Aquino’s signature before it becomes a law.

“If you want inclusive growth to happen, you need to put cash in the hands directly of the consumer, that’s the best way. That’s what the CCT (conditional cash transfer) program is for. We do the CCT program for non-taxpayers. We spend P75 billion, it’s a human capital investment but at the same time it’s really a step towards inclusive growth. You can’t find a better mechanism than bringing up the take home pay of ordinary workers,” Quimbo said.

“Whether there would be a revenue loss, it would be recovered through consumer taxes meaning VAT. There are studies that showed that 77 percent of every peso that you return to the consumer is spent on VAT-able items, and then the corporations who will benefit from greater consumer spending will likewise have higher income,” he added.

Meanwhile, Quimbo is unfazed by warnings that a bill designed to raise taxes on sweetened beverages will drive away investors.

But he admits that getting it passed will also be more difficult than the sin tax bill.

“It’s a bigger challenge because it’s more difficult to explain, unlike cigarettes everybody knows it’s bad. But drinking cola, kids drink it, everybody drinks it, so it’s not very apparent. It’s also difficult when you have 87 percent of parents drinking at least a liter of soda a month. We need these funds to be able to convince or fund the DepEd program,” said Quimbo.(MNS)